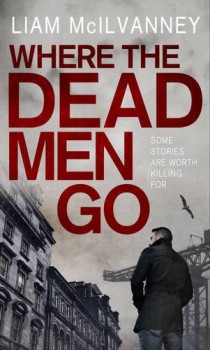 Where The Dead Men Go

Journalist Gerry Conway is back on his old paper and immediately embroiled in the death of a colleague and Glasgow’s infamous gang warfare.

Where the Dead Men Go opens with a headlong dive into the shambolic world of newspapers where an editor's tenure is similar to that of a Premiership football manager, and no one can stem the tumbling circulation figures

Journalist Gerry Conway appeared in Liam McIlvanney's first book, All the Colours of the Town, where the action took in Scotland and Northern Ireland. The fall-out from that saga is still strong, even after three or so years. Gerry was fired from the Glasgow Tribune, but after a short-lived move to the dark arts of PR, he’s back on his old paper covering politics. He has to watch, though, while his former protégé Martin Moir rules the roost as crime correspondent.

But Gerry finds himself back covering crime after a suspected gangland shooting, followed in short order by the death of Moir. There's a brief flurry as police investigate, then it's put down as suicide. Conway's not convinced and neither is Moir's widow. So he starts digging – and finds himself embroiled in Glasgow’s infamous gang warfare with just a tame copper, Jan Lewicki, to watch his back.

McIlvanney, who now lives in New Zealand, is son of Tartan noir great William, and they share a gritty eye for Glasgow's rough side. McIlvanney jnr writes chiselled prose and can nail a down-at-heel bar or scruffy flat in a few sentences, but both the first book and this one are slow burners. You may feel, with justification, that this reflects the world of a journalist. But it does mean that the threats to Gerry, when they come, feel diluted amidst all the talk.

The book returns to some of the themes McIlvanney addressed in All The Colours of the Town – politics and the print media. As with any number of Glasgow novels, there’s also the presence of the gangs and sectarianism. This time out, the political scene is to the fore, given Gerry’s new beat. Aside from the impending Scottish independence referendum, he finds himself looking into the city’s preparation for the Commonwealth Games.

Where the Dead Men Go is sharp as a tack and checks in at the noir end of the genre, although it’s refreshingly free from blood and guts. If you like crash, bang, wallop crime fiction, it might not be to your taste. But if you like topical, intelligent writing, with a tenacious and believable hero, it’s one to read.