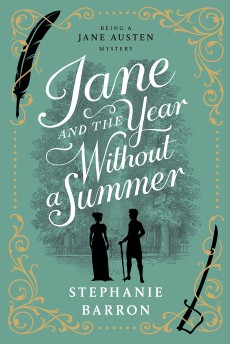 Jane and the Year Without a Summer

Jane Austen and her sister Cassandra travel to Cheltenham in an attempt to improve Jane’s ailing health, but their holiday turns out not to be as relaxing as they had expected.

Jane Austen’s health has been a cause for concern for some time, so she decides to consult a doctor in Cheltenham and perhaps take the waters and undertake some healthy strolls there for a holiday. With her sister Cassandra, Jane books a room in a private boarding house, next to the York Hotel.
The other guests in the boarding house are an unlikely mix: a bad-tempered elderly vicar, his rude and outspoken wife and their small dog Thucydides; an ex-naval officer, Captain Pellew; Miss Williams, a beautiful lady in a Bath chair, together with her carer, Miss Fox; and a young woman, Mrs Smith, who appears to have a job at the theatre. All are being provided for by the illustrious Mr and Mrs Potter, the owners of the boarding house. In addition, Jane soon encounters an old friend, Raphael West, who is a guest at the hotel next door. So, there is plenty for Jane to observe and speculate on with her writer’s eye, especially when things start to go awry.
Interactions and discussions among the guests provide plenty of opportunity to expose the general atmosphere of this period in the 19th century. The way in which women in particular were seen and treated at this time is a central theme of the book. Stephanie Barron has taken great pains to expose some of the feelings such treatment caused, and Jane has a refreshing attitude to much of the stereotyping that she has managed to overcome in order to write and be published. Descriptions of the clothes, the means of transport and the furnishings all contribute to a wonderful picture of the times.

The story is set in 1816, known as the Year Without a Summer, when climate abnormalities caused a decrease in global temperatures. This is helpfully explained in one of the many footnotes. These notes give some detail on points of history, such as the date of the first test for arsenic poisoning; the beginnings of the fire brigade and details of the Evangelical movement in the 19th century. Apart from numerous mentions of grey and rainy weather, the title is not particularly relevant to the carefully constructed plot.

The identity of the murderer is hidden right until the end, as actions obscure the truth despite the various clues.  The writing, in Jane own style, is very fluent, and gives an addictive quality that the book impossible to put down.

This is a real comfort read providing a welcome oasis of calm. Regardless of rats and poison, it is the ideal companion for a summer afternoon. To be transported to those days so effectively and yet have issues raised that are relevant, even today, is a rare joy.