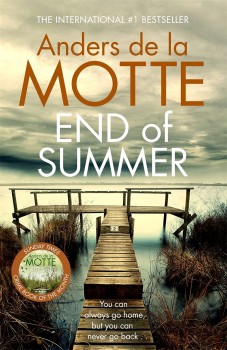 Veronica is a bereavement counsellor in Stockholm. When a familiar-looking young man joins her group with a strange story to tell, Veronica is transported back to her rural home of 1983 where, one summer's day, her little brother Billy went missing without trace.

This is the rather sad story of little Billy who goes out to play one late afternoon and never comes back. It’s set in a farming area of Southern Sweden, and the action ranges from the summer of 1983 to the present day. The main character is Veronica, working as a grief counsellor in Stockholm but barely functioning as such. We soon come to realise that she is really Vera, little Billy's older sister, who’s still trying to come to terms with the traumatic events of that summer.

There are hints at a love affair gone bad and a series of emotional, but anonymous, letters for us to read – could they be between Vera/Veronica and an unknown man from her past? Is this why she covers up a livid scar on her arm?

As the story switches from 1983 to the present day I did find myself wishing that the writer would get on with it. But halfway through the book, the 1983 narrative peters out and then the pace hots up. Anders de la Motte writes well and this is a good, easy to read and well flowing translation by Neil Smith. His depiction of Retfinge, a rural area way down south from Stockholm, owes more than a little to the Wild West with its slow-witted law enforcement officers and powerful local farmers/cattle barons.

After four-year-old Billy disappears, Vera's beloved mother ends up in a mental hospital and eventually weighs down her winter coat with stones and walks out onto a thinly frozen lake, leaving Vera and her brother Mattias doubly bereft. Chief of Police Krister Mansson, who’s looking for a quiet life in this remote spot, has little luck in finding the boy.

But the village folk are soon pointing the finger at local bad boy Tommy Rooth, who is the sworn enemy of Uncle Harald (head honcho in Billy and Vera's family and hard as nails). There's no real evidence to bring a prosecution against Tommy but eventually he and his family are run out of town by Uncle Harald and his cronies. Life settles back into some kind of normality and the puzzle of what happened to Billy is destined never to be solved …

But 20 years later a young man calling himself Isak joins Veronica's therapy group. There is something familiar about him as he recalls events from home that only Vera/Veronica knows about.  Could he possibly be her brother Billy?  From then on the action takes off. Veronica makes contact with her brother Mattias, now a police officer himself, and goes home to the farm looking for answers. The plot twists and turns in a satisfactory way as she scrapes away the layers of deceit to find out what really happened in the summer of 1983. More than once she finds herself in mortal danger as many of those still living in Reftinge are determined to stop her from succeeding.

Eventually all is laid bare – and it's a very sad ending. But Veronica/Vera feels more able to cope with the future and move on in her life. Good for her. She is a very plucky heroine and thoroughly deserves it.

End of Summer is part of a quartet by Anders de la Motte, each with a seasonal theme. This is the second in the series I've read so far and although they stand alone, they do follow the same structure – to-ing and fro-ing between then and now, interspersed with some enigmatic first person musings. I wouldn't recommend End of Summer if you have a little grandson called Billy (like me!) but nevertheless this is a gripping and satisfying read. And if you like your Scandis with a strong sense of place and community, then this one is for you.