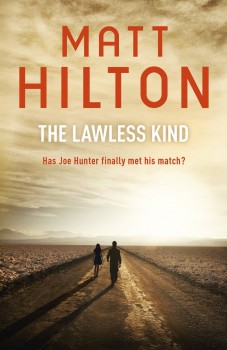 Joe Hunter goes across the border to Mexico to bring back a child that’s been abducted by its father. The only problem is that the father is high up in one of the powerful drug cartels and has no intention of giving up the boy without a fight.

Joe Hunter is back for his ninth outing going up against the bad guys. I’ve followed Hunter’s activities throughout the majority of his time in the US, coming to the series with the second book and then quickly seeking out the first. Throughout that time, both Hunter himself and the series has gone from strength to strength, as both Matt Hilton’s writing and the character himself have considerably matured.

The action scenes have very much been Hilton’s strongpoint throughout and in many ways The Lawless Kind is his most ambitious book yet, as it’s basically one long action scene from start to finish. Don’t get me wrong, that’s certainly not a criticism, though. There are plenty of character moments en route, with an ensemble cast of nearly all Hunter’s close associates. Jared ‘Rink’ Rington is there, of course, and a Joe Hunter book without him would be almost unthinkable; he’s also joined by the ever-stylish Harvey, plus Hunter’s other solid, competent sidekicks, Velasquez and McTeer. They all have their part to play and the action unfolds from several points of view, giving added depth to the book.

Hunter is asked for a favour by his old friend Walter Hayes Conrad, the man who was his boss and later almost a father-figure during his time working for the shadowy organisation called Arrowsake, which still casts the occasional long shadow over Hunter’s less than peaceful existence. On this occasion, Conrad is asking for a personal favour, rather than calling on Hunter’s professional services, but where Conrad’s concerned, the two areas of his life are often inextricably linked. His granddaughter’s five-year-old son has been abducted from the US to Mexico. The authorities can’t help as they see the father having a legitimate claim to the boy, and there’s another complicating factor: the child’s father is high up in a powerful drug cartel, with a small private army at his disposal and half of the cops in the area on his payroll.

From the minute Hunter and co, accompanied by Conrad’s daughter, Kirstie, cross the border into Mexico, the tension tightens like a noose and never slackens its grip. The action is wholly cinematic without ever descending into confusion or cliché. The bad guys are bad, but believable, and once again Hilton manages to prevent any of them turning into caricatures. Hunter goes up against a variety of opponents, including some from his old army days, now working as mercenaries for the cartel. James Lee Marshall, who Hunter beat to a place with Arrowsake, brings a sharp edge to the proceedings, and shows Hilton’s considerable skill at fleshing out incidental characters who all have their part to play.

There are few thriller writers who can sustain this level of action throughout a book, and indeed a series, and even fewer characters that stay this strong after multiple outings. It’s hard to describe Hunter without drawing the inevitable comparisons with Jack Reacher, but for me, Hunter comes out top every time.