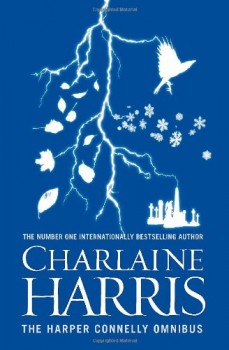 When Harper Connelly was struck by lightning she gained the ability to find dead bodies. It's not the easiest way to earn a living, but there’s always plenty of demand for her services.

Charlaine Harris is probably best known for her Sookie Stackhouse series, brought to a television audience under the name of True Blood. But almost ten years ago, in Grave Sight, she introduced a new main character, Harper Connelly, a woman with the ability to find dead bodies. Three more books followed and now they’ve been brought together in an omnibus edition.

A lightning strike is a handy way to hand-wave why your protagonist has conveniently acquired a new – and usually supernatural – ability. Meg Cabot did this in When Lightning Strikes, the first of her excellent 1-800-WHERE R U series for young adults, and Harris employs the same plot device to good effect here. But in this case, the people Harper finds are very definitely dead rather than missing.

The first book hits the ground running, without wasting time on back story or exposition. This ability to jump straight into a story is one of Harris’s strong points. She’s got a light touch with world-building, dropping in just enough information both to fend off confusion and pique interest.

It becomes obvious fairly quickly that the people – particularly police departments – who call on Harper’s services, view her with suspicion, but despite that, there’s plenty of demand for what she does. As jobs go, hers is a pretty dangerous one as there are usually plenty of people with vested interests in making sure that certain bodies remain undiscovered, and occasionally, Harper turns up secrets of a different kind, not just the remains of murder victims. She doesn’t just find the bodies, she knows their names and usually what the cause of their death.

Harper works with her step-brother, Tolliver Lang. They’re the children of feckless, drug and drink-addicted parents who left the care of their youngest children, Mariella and Gracie, to Harper and her younger sister, Cameron, but Cameron’s disappearance brought the dysfunctional family to the attention of the authorities and ended up with the younger children being adopted by their aunt and uncle while Harper and Connelly went to live with Tolliver’s older brother, Mark.

Harper has never stopped searching for her sister, and the plot thread relating to Cameron’s disappearance is always in the background, providing the motivation for Harper’s continuing work with the dead. Harris works well with female characters, staying well away from the Anita Blake type and focusing instead on an ordinary woman struggling to deal with an extraordinary ability.

This is well-paced, easy to read urban fantasy that provides plenty of chills. The books are all self-contained, but work particularly well in this omnibus edition, allowing the background story to unfold gradually without a break as Harris finally provides Harper with the resolution she’s been looking for, both in terms of her relationship with Tolliver and also with regard to the mystery of Cameron’s disappearance.

And, with seemingly never-ending series seeming to be even more in vogue than ever, it’s nice to find one story that does end, wrapping up loose ends in a way that I hadn’t expected, whilst providing a satisfying pay-off on all levels in the final book, Grave Secret. This is one series that definitely repays reading in the correct order over a relatively short space of time.