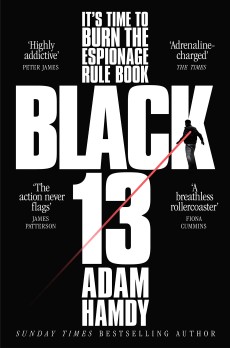 Author and screenwriter Adam Hamdy, who works with studios on both sides of the Atlantic, has shifted the basic plot of his successful Pendulum trilogy into a new series featuring former SAS soldier and exiled MI6 agent Scott Pearce – a real Captain Scarlet of a character who seems to be totally indestructible!

The basic idea is simple – and not far removed from the main theme of Pendulum. But it’s a message that certainly resonates. The nature of political discourse is changing with extremists at both ends of the scale seeking to dehumanise their opponents.

Right wing extremism now seems to be occupying more of the time of British police and security services than Islamic fundamentalism. It trades on populist worries over immigration and its perceived effects on the country’s social structure and is being preached as a return to so-called traditional values. Part of the money to finance the spread of this warped ideology is provided by giant international companies, mega-rich individuals and organized crime, with the sole aim of enhancing their own power and feeding their insatiable greed.

The gifted mixed-race loner Scott Pearce is the one man who can make a difference. Hamdy war-games a series of unreal scenarios to produce a story long on violent action and state of the art technology that requires a massive suspension of disbelief to even contemplate.

This unlikely story begins with the murder of Pearce’s army pal, now a struggling PI, Nathan Foster, hired by lawyers instructed by a shadowy client to look into the private bank run by a British aristocrat. Lawyer Melody Gold travels halfway round the world to convince Pearce to continue the investigation, but the pair must survive an attack by unknown forces following her. And the danger does not subside when they return to Britain.

Scott brings in another military friend, Wayne Nelson, to act as Melody’s bodyguard, while he investigates Nathan’s death and its subsequent official cover-up. He boosts his small team by calling The Syrian, the disabled and deeply traumatised Leila Nahum, a genius in the online world.

In a narrative that takes in geopolitical machinations, undercover French agents, a Ukrainian mobster, sex rings and the far right, Scott battles to foil a terror plot of unimaginable proportions. In its more serious passages, this is a frightening story, highlighting the ease with which public opinion and events can be manipulated. Read what Hamdy says at the end about an experiment he carried out in this field.

While the story has everything a good action thriller should, how Pearce is still alive quite amazes me. He is the master of skin-of-the-teeth escapes – probably a good thing as his death would spell a premature end to what otherwise looks to be a promising series for action hero fans.