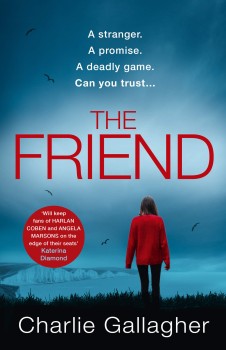 With his daughter in a coma, Danny wants someone to blame. But he should be careful what he wishes for.

Danny Evans life has fallen apart. No longer the local football hero, he is living in a hotel in Dover, drinking himself to oblivion, and barely talking to his wife, Sharon. All because someone drove his daughter to attempt suicide after a faceless, nameless predator groomed her and her friends then blackmailed them into taking compromising selfies and more.

Richard visits his wife daily, but talking to her does not ease the gaping hole in his chest, because she was killed senselessly in a hit and run accident, and her grave is just not her.

The stranger, a private investigator, is a timely angel, offering answers. He knows the identity of the predator who stalked Danny’s daughter. He knows who killed Richard’s wife. But answers are irrelevant if you can’t act on them. And when he divulges those identities, Danny and Richard will act out of revenge, with deadly consequences.

DI Joel Norris has barely been given the okay to go back to work when he is called in to investigate a suspicious death. But as the body count piles up, he and his new sidekick, DS Rose, will need to find out who is behind the seemingly unrelated murders.

I like that we see Joel as an astute and questioning detective rather than being told about these qualities. But in some ways, the book reminded me of a grubby, street-hardened take on Midsomer Murders in that it is far-fetched that for such monstrous crimes there is only Joel and his miserable DS, Lucy Rose, doing the work. As the author is a former detective, it would be interesting to know if he sees this as passable or a suspension-of-disbelief tester.

The main police characters are, for now, boring stereotypes; the detective under the psychiatrist, and his tooth-grinding unapologetically sulky subordinate. With luck, they will grow personalities as the series evolves, and  I hope this happens, because the plot in The Friend is attention-keeping. It is unpredictable and tantalizes with morsels of information, eking out the whys and wherefores, leading the way down dark and unexpected paths, and introducing some non-police characters brought to life through a heavy dose of flawed thinking and horrific behaviour.

I can’t say I like Danny Evans. He is self-absorbed and far too deep into a serious relationship with the bottle to instil any real compassion. His wife is one dimensional until near the end, where she shows herself to be more involved in her daughter’s problems. Richard, however, caught my heart strings. He is a true victim, even when he joins in The Friend’s deadly game and his actions are entirely reprehensible.

The Friend is a gritty, intelligent, and relatively unusual story that kept me on my toes. It starts slowly, but with a degree of intensity then once past the lengthy introductions, it gathers speed, pulling all the strands together, featuring a detective team I would like to follow.