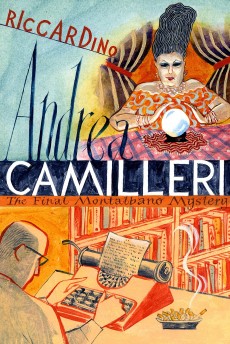 Inspector Montalbano embarks on his final case after receiving a phone call early one morning asking him to meet someone called Riccardino, but on arrival at the appointed place he finds that the caller has been shot dead and his three terrified friends are huddled nearby.

Inspector Montalbano is surprised to receive an early morning phone call reminding him that he is late for an appointment. He does not recognise the caller’s name, Riccardino, but the man rings off before Montalbano can ask anything at all. So, intrigued, he sets off for the meeting point. On arrival, he finds that Riccardino has been shot dead by a man on a motorbike, and his three friends are huddled together nearby, looking shocked and terrified.

Montalbano takes the men back to the station, not realising that another detective was due to investigate the scene. The situation becomes more complicated when the local bishop, the uncle of one of the men, asks to see him. And then, soon after, a lady with a beehive hairdo turns up at the police station reporting something about a man in a lorry behaving strangely at the local dump late at night.

This is the start of a very good and interesting plot that gets more complicated as the story progresses. All the usual characters are included: Fazio with his lists; the Commissioner who is even more difficult than usual; Catarella, whose deference to Montalbano is legendary and whose speech is, as always, almost incomprehensible; and, of course, the distant Livia. Even Mimi Augello is included, despite not being at the office. Descriptions of the landscape paint a compelling picture of the Sicilian scenes such as Montalbano’s house, overlooking the sea, and Vigata, home to the police station in which Montalbano works, and the square where poor Riccardino gets murdered. The square, overlooked by apartments, is such a familiar scene in the Italian city landscape.

Montalbano is getting very tired of solving cases such as this. Not only solving them but fighting all his superiors who always think there should be a simple solution to events. He really has had enough. Consequently, there is a lot of self-reflection throughout the story. He also speaks his mind more than usual. His language is also more colourful than usual and this, together with his slightly cynical observations, provide a good number of laugh out loud moments. The book definitely feels like his last, as it indeed sadly turned out to be.

In an unusual twist, Inspector Montalbano, the character, is frequently contacted by the author of the Montalbano stories, another thing that stresses him. The author even, towards the end, offers the inspector a possible ending to the current case. This interaction between the inspector and the author is undeniably strange and conceptually quite difficult to understand.

The suspense is maintained right to the end and as always, the translation from the original Italian, by New Yorker Stephen Sartarelli, ensures that the book remains readable and fluent. This series will surely be greatly missed by the readers who have taken Montalbano to their hearts. The presentation of the book in an additional, special, cover is a nice touch.