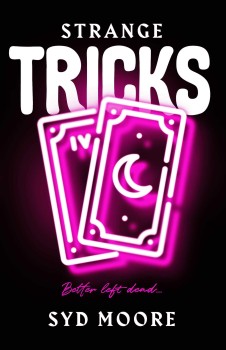 Lost boys and family mysteries. The Essex girl is off her patch for this mystery when a psychic in Godalming put Rosie Strange and her assistant, Sam, on the trail of potential serial killer.

Essex girl, Rosie Strange’s connection to MI5 is out in force when she and her assistant Sam are called in to investigate a psychic in Godalming who has been worryingly accurate about a couple of police cases. Rosie’s job is to see if there is any veracity to the woman’s claims to receive messages from the dead. In fact, it is Sam who is due for the biggest surprise when they find his father has contacted the psychic for help in finding out what happened to Sam’s brother who disappeared when Sam was a teenager.

The mystery widens into the hunt for a possible serial abductor or killer when the psychic reveals that she has been in contact with a group of boys who were taken by the ‘Washing Up Man.’ The chase for clues leads Rosie and Sam from Godalming to Yorkshire and also puts Rosie in extreme danger as she finds the chilling and gruesome secret at the heart of the mystery.

This story has a much darker tone than Rosie Strange’s previous outings. She still investigates with the same lightness of touch and determination to confound any expectations of an Essex Girl, while wearing cowboy boots, of course! Rosie also seems to have finally worked out that she has inherited the family tendency towards psychic abilities, while not totally believing in them herself. This is not the most convoluted of mysteries as the clues Rosie finds follow a pretty straight line as she works from Essex to Surrey to Yorkshire with little deviation to give the reader a chance to get ahead of her. It is nice to get some back story for Sam, but it’s not certain whether the tragedy in his life is going to bring him and Rosie closer together in the end.

It’s always fun to spend time with Rosie Strange, despite a story with a particularly grim premise. It will be interesting to see if some of the threads laid down in Strange Tricks will be followed through in later books.