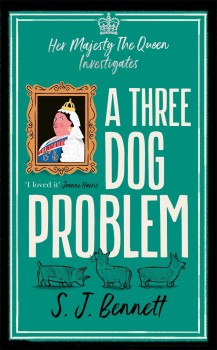 When one of the Queen’s paintings turns up in an unexpected place, her secretary Rozie Oshodi is tasked with following its trail from Buckingham Palace to a Royal naval exhibition in Portsmouth. At first this seems to be just a simple investigation, then Rozie starts wading through some very murky waters.

The surprise hit of last year for me was SJ Bennett’s charmingly entertaining cosy, The Windsor Knot, in which Her Majesty the Queen took time out of her day job as reigning monarch to join forces with her newly appointed secretary Rozie Oshodi to solve the puzzling mystery of a young man found dead in Windsor Castle.

Cards on the table here, I’m an ardent republican and not really a fan of cosies but somehow Bennett sold the whole thing to me so much that my disbelief was well and truly suspended from the highest flagpole in the castle and much to my surprise, the idea of the Queen as an amateur sleuth worked perfectly well, even though it does take the current trend for real life (usually dead) historical figures solving crime to a whole new level!

In this second book of a projected five book series, the shock result of the Brexit referendum has divided the nation, and the Queen is waiting – with some trepidation – for the conclusion of the long drawn-out US presidential election. She also has concerns even closer to home as Buckingham Palace requires major, extremely expensive, works. The wiring is substandard, pipes are leaking and problems are springing up everywhere. Amidst all this, a seemingly minor mystery piques the Queen’s interest when she comes across an oil painting of the Royal Yacht Britannia, given to her in the 1960s, on display in a Royal Navy exhibition in Portsmouth. The issue for the Queen is that she did not authorise the loan of the painting that sued to hang outside her bedroom and – even more oddly – the Admiralty believe the painting is theirs. The Queen tasks Rozie with finding out how the painting made its way from the royal collection to the Admiralty.

Rozie’s investigations take her into a murky world behind the lavish, glittering façade of royal life and the royal collections where there are large sums of money to be made by those who know how to take advantage of the system. Amongst the many twists and turns, this was the one I found most fascinating as art theft and forgery is a particular interest of mine and coming across it here was an unexpected bonus. Naturally there’s a death involved – an elderly, seemingly universally disliked housekeeper who died in a bizarre poolside accident – and some nasty anonymous notes. But fortunately (for me, anyway) my fears for the royal pets proved unfounded, although there was something of a red herring (or rather a russet corgi) involved along the way.

A Three Dog Problem amply lives up to the premise of Bennet’s first book. Her Majesty – known as the Boss to her employees – comes over as both shrewd and likeable and it’s easy to see how she commands both respect and loyalty. Rozie is as brisk and no-nonsense as ever, not easily intimidated, even when she falls victim to the poison pen writer’s ire. The casual racism and misogyny she encounters in her job comes as no surprise in such a rigid, hierarchical setting and Rozie, who comes from a very different background to most of the senior secretariat within the Palace, provides a penetrating outsider’s view of the establishment in all its hidebound – and somewhat fading – glory.

I was wholly captivated by this subtle, clever mystery and in this contest, I’m entirely happy to proclaim ‘Long live the Queen’! And although I would still draw the line at curtseying, I might manage a respectful bow of the head in acknowledgement of Her Maj’s ability to keep digging until the truth is unearthed, although I very much doubt future books will delve into the latest round of real life royal scandals.