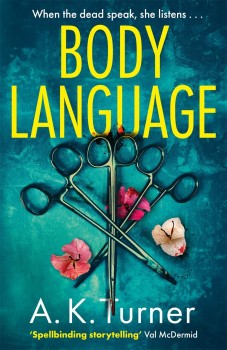 When mortuary assistant Cassie Raven is faced with the prospect of helping with the post-mortem on her former teacher, Mrs Edwards, Cassie knows she owes it to the woman to make sure she’s looked after, even in death. What she’s not expecting is to end up on the trail of a murderer.

Cassie Raven, a tattooed goth with a somewhat chequered past, works as a mortuary assistant. It’s not a job that would be everyone’s cup of tea, but Cassie enjoys her work, despite the gruesome reality of post-mortems and all they entail. She’s recently broken up with her girlfriend who hadn’t believed Cassie’s assertions that the occasional nights she’d spent on a friend’s sofa had been purely platonic. On top of that suspicion, Rachel always had the feeling that Cassie was holding something back. And she was right.
There’s something that Cassie has kept from everyone: family (all she has left is her Polish grandmother), friends (not many of them) and colleagues (her boss, Doug, and fellow mortuary assistant, Carl). Cassie’s secret is that sometimes the dead talk to her. And she talks back. That’s not something she wants to admit to as she knows everyone will just think she’s a crank.
When Mrs Geraldine Edwards is found dead in her bath, there are no signs of foul play and the post-mortem was expected to be wholly routine, but for Cassie it turns out to be anything but a normal day at work. Mrs Edwards – Mrs E, as Cassie always called her – was the teacher who helped Cassie achieve her potential at school, leading to the job she loves. She assures Doug she can handle the work, despite her past relationship with the dead woman, as she wants to make sure that Mrs E is properly looked after. What she’s not expecting is to hear old mentor say: “Cassandra. It’s not my time yet.”
Unfortunately, like her mythological namesake, no one takes Cassie seriously when she tries to get the police to investigate further. They’re more interested in tie disappearance of an old man’s body from the mortuary. So Cassie has no alternative other than to do some investigating of her own.
To start with, Body Language was a hard sell for me. I didn’t immediately take to Cassie Raven. I felt that author AK Turner (who has also written as Anya Lipska) crammed rather too many cliches into her character in an attempt to make her memorable. A goth who thinks she communicates with the dead was possibly a stereotype too far, as was saddling an uptight female police officer with the unenviable name of Phyllida Flyte, who would have done better in the pages of a cosy set in the sleepy little village of Sleuth-on-Sea.
I took a couple of breaks but kept being drawn back to the book in spite of, rather than because of, the main characters. The central mystery was what kept drawing me back. I wanted to know who was responsible for Mrs E’s murder and why she was killed, and I was also intrigued by the body theft secondary story. The book gradually gathered pace and in the last quarter, I settled down and devoured the closing stages in one sitting. I even warmed to both Cassie and Phyllida Flyte in the end. Turner has a light touch with the woo-woo and I’m always a sucker for the paranormal in crime, so I’m glad I persevered.
The idea of a mortuary assistant with a stronger than usual connection with the dead is worth exploring further if the characters are left to develop at their own pace, rather than being lumbered with quirk overload, I think this will be a series worth following.