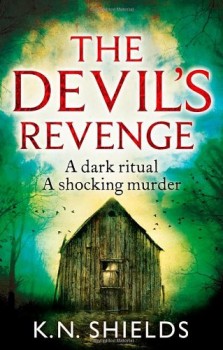 Following his debut with The Salem Witch Society, K N Shields brings back his thoughtful detective Archie Lean and the half-Native American criminologist Perceval Grey for another tilt with the powers of darkness in a New England still almost as superstitious and hidebound as it was two hundred years before at the time of the Salem witch trials in 1692.

A thief is killed and buried unmourned. Two days later his body is dug up and burnt. Occult symbols mark nearby walls together with the grim message: ‘Hell awaits.’ Lean and Grey must solve a mystery which involves revenge, death, witchcraft, Native American tribal mythology, the Viking settlement of New England, alchemy – and a killer seeking to invoke ancient supernatural powers.

I hesitate to call this a thriller, although the two detectives survive their share of life-threatening situations. But such is Shields’ narrative skill that these seem quite normal in a plot involving so deep an excursion into the world of the occult. It is, rather, a brilliant detective story finely balanced on the very edge of credibility. That, together with his impeccable knowledge of his native town’s history – everything is there from the detail of women’s fashions of the day to the layout and history of Portland – make it all come alive for the reader.

This is definitely a slow burner. Early chapters carefully set the scene and build up tension for what is to follow, but once the action starts it fairly gallops along. Like his earlier book, to which it is linked, it is the characters of Grey and Lean who anchor the story – Grey, the aesthetic near-Holmesian criminologist, constantly fighting prejudice as a half Native American despite his privileged white upbringing and Lean, the practical but often surprisingly erudite Presbyterian Deputy, very humanly concerned as much with his family as his job, are as good and believable a pair of buddies as you are ever likely to come across.

As a standalone this is a first class read. If you’ve not read the first in the series, do so, because it will explain a great deal of the genesis of this story. This, in turn, will surely set the ground for a third book to come – rather signposted by the lack of resolution of several plotlines. I thoroughly enjoyed The Devil's Revenge and look forward to Shields’ next offering. If he will pardon the pun, he is rapidly building a devoted and substantial ‘cult’ following.