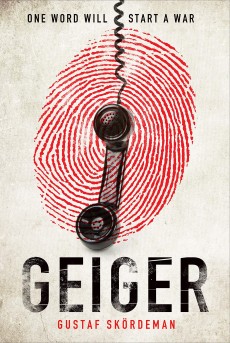 Grandmother Agneta Broman answers a phone, hears only one word then shoots her husband and disappears, leaving the police at a loss.

A single codeword, Geiger, signals the end of the life Agneta Broman has known for many years. During her marriage to one of the most beloved Swedish TV stars, a man affectionately known as Uncle Stellan, she has created a pleasant, comfortable existence for her family, including her two daughters, Malin and Lotta, and her grandchildren. Thanks to her husband’s fame, she was able to travel abroad and also meet many interesting and influential people who attended extravagant parties in their home. Then a landline call with that memorable, significant word turns her world upside down.

She has known for decades that it will happen yet is shaken as she must now complete an assignment conceived decades ago. Agneta retrieves a gun from its hiding place, attaches a silencer, quietly shoots her husband in the head and vanishes, leaving behind her wallet and keys, and an abundance of questions.

Police officer Sara Nowak unofficially joins the investigation into the disappearance and murder, although she really should not be getting involved as she’s meant to be concentrating on the fight against prostitution and sex trade, but she finds it hard to focus while raging both inside and out at the futile efforts to try to stop the abuse of women. Unlike many fictional detectives, Nowak’s private life is reasonably stable although of course nothing is perfect there due to her pent-up fury, and the upsetting situations she has to handle.

Sara is drawn to the Geiger case because of her childhood, as she spent many summers playing with Broman’s daughters and living with her cleaner mother in the property’s grounds. Her memories of holiday fun are marred by the realisation that she was actually an unwelcome child, looked down on by those with more privilege. Despite that, she decides to find out more about the allegations that Stellan was a spy. His cultural collaboration with the former East Germany appears to have provided cover for a totally different type of collaboration that destroyed many lives.

Gustaf Skördeman’s debut novel, translated by Ian Giles, shines a light on Europe’s complicated post-war history and the rife espionage that frequently led to different often absurd leads being followed. The story is told by two very different characters and seen from two perspectives it develops at satisfying speed as more apparently unconnected names, elements and snippets of information begin to create an unsettling case of double identities and clandestine existences. Sara and Agneta have conflicting recollections of times when they were together in the house, and of the past, of course.

As the story progresses, we find out so much about the older woman’s experiences in the post-Cold War period and details of the intricate and disturbing plot made by those in power, convinced that the world has to follow certain political rules. Russia still plays a huge role on the world stage today so the historical context of the novel provides a brilliant background for the perception of contemporary Sweden. Sara, on the other hand, concentrates on the current urgent violence until she learns more about consequences of her Polish roots.

Geiger is a complex well-crafted spy thriller, with plenty of fascinating details and realistic characters. As a minor aside, the children’s cartoons Bolek and Lolek were Polish, and not East German but I realise that some tiny facts might escape the spies’ attention.