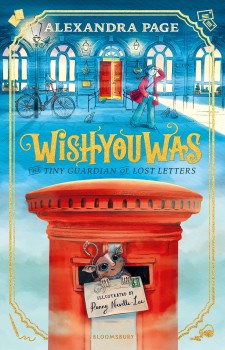 Penny Black lives with her uncle in a London post office. Her lonely existence changes dramatically when she encounters a funny, courageous, talkative little creature trying to run off with a letter. This catapults her into the secretive lives of the Sorters, the tiny guardians of lost letters.

Young Penny Black lives in London with her emotionally distant Uncle Frank who runs a post office. Penny’s mother, a pilot, is away for extended periods, delivering airmail., and Penny misses her dreadfully. The year is 1952 and post-war London is struggling in the grip of thick grey fog that is making daily life both grim and difficult as people struggle to go about their daily business in the increasingly frantic run up to Christmas.

Work in the post office is hectic but although Penny does her best to help, Uncle Frank is impatient with her mistakes and she ends up spending a lot of time by herself, becoming increasingly lonely and unhappy. Then one day she sees what she thinks is a rat, running around in the post office, trying to make off with a letter. She tracks it down to a drawer and finds that its tail is caught in a trap.

Penny takes pity on the furry little creature and tries to help. To her amazement, it pipes up in perfectly understandable but wildly ungrammatical English and takes offence at being mistaken for a rat, declaring itself to be a Sorter, Second Class, called Wishyouwas. Penny takes the existence of a talking furball entirely in her stride, in the unflappable tradition of the best children’s books. Wishyouwas has dextrous paws, small ears, large round eyes and a twitching nose. The two find they have something in common; they’ve both fatherless. Wishyouwas lost his to poison laid by humans and Penny’s died in the war.

Penny learns that Sorters, who live in a highly organised secret underground colony known as The Bureau, are the self-appointed guardians of lost or seemingly undeliverable letters and work tirelessly to get such letters to their intended destinations. But the Sorters are under threat from an infestation of rats in their tunnels and are also in danger from the sinister rat catcher, Stanley Scrawl, who appears to be hunting more than just the rats.

Wishyouwas is the most delightful book for younger readers that I’ve read in years and any adult would have to have a heart of stone not to fall in love with the Sorters and their new human ally, naturally referred to by them as Dear Penny, as the Sorters consistently view the world through the prism of letters. Their names reflect this, from the Sorter royalty, known as Dearmadam and Dearsir, to Sorters such as Handlewithcare, Stampduty and Thiswayup, an elderly, one-legged Sorter who gets around with the aid of a compass as a crutch. And, of course, the young Queen Elizabeth is revered by the Sorters as the Head Postmistress, as her image appears on all the stamps and they work on her behalf, even if she doesn’t know of their existence.

Naturally, Penny’s inadvertent intrusion into the Sorters’ secretive word has unintended consequences but she’s determined to do her best to undo any damage she’s caused and ends up working with her new furry friend to protect the Sorters from Scrawl and his dog Ripper. Penny is a redoubtable young protagonist, fiercely loyal to Wishyouwas and all the Sorters, and ingenious in their defence. Wishyouwas is trusting, as loyal to Penny as she is to him, he's also funny and brave, distinguishable from other Sorters by his idiosyncratic grammar and immediate willingness to accept Penny as an ally and to trust her, come what may.

Penny Neville-Lee’s illustrations bring this charming book vividly to life and perfectly compliment Alexandra Page’s clear, succinct prose. Together they make this delightful tale both visually appealing and highly entertaining. The book is sweet without ever being either twee or cloying. There’s a very real edge of danger to the tale and the dangerous underground battle with the rats to prevent the Sorter colony being overwhelmed is tense and fast-moving. Stanley Scrawl is suitably Dickensian in his villainy, with a greyhound as his sidekick rather than a bull terrier. As the human companion of a rescue greyhound, I was concerned about the fate of Ripper, but I should simply have put my faith in Page’s storytelling. Rest assured that there’s no need to consult doesthedogdie.com on this occasion! And trust me, no one cares about spoilers where dogs are concerned.

Comparisons with The Borrowers are inevitable, but – whispers quietly – I was never a fan of theirs, whereas I immediately fell in love with the Sorters. This is an utterly adorable Christmas story, and I was over the moon to discover that Penny Black and Wishyouwas will be returning for future adventures. Do what I did on a cold winter afternoon and curl up under a blanket with Wishyouwas. You’ll find the book – and the little Sorter himself – better than any hot water bottle!