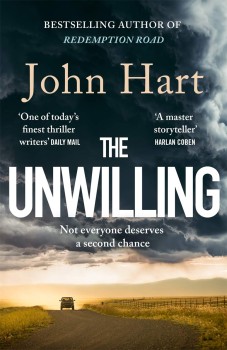 John Hart picks up a story from the beginning and takes you with him for the ride. He writes about families, relationships, consequences, hardships and reactions and he brings all these skills together in The Unwilling.

Jason French is home – home to a mother who can’t deal with the thought of him, a cop father who is desperately trying to keep his family on the rails, a younger brother, Gibby, who idolises him, and the ghost of his twin brother who was killed in the same war that Jason immediately signed up after getting news of his death. He comes home following a dishonourable discharge, drink, drugs and a dark stretch in prison. There seems little point in assuming that he will be a quiet addition to the family, or a worthy member of society. He is difficult, cold, dangerous and physically very able. He has seen and learned things about people and himself that no one in their right mind would welcome.

It is hardly a surprise when the cops arrest him for the sickening murder of a girl he has been seen with. He is the easy option. With his father off the case, and the police unprepared to investigate further, 18-year-old Gibby decides to try to find out what exactly is going on. Gibby has a steep learning curve; he’s been mollycoddled by his over-protective mother and deprived of both his brothers. He walks into the fists of bikers, the reek of sudden death, the guilt of defying his father and the fear of prison. All he knows is that none of what is happening is fair and that Jason needs someone on his side.

Hart writes in both the first and the third person – a difficult trick to pull off, but he manages it with aplomb. He gives us a truly bad villain and an anti-hero clearly up to no-good, but whose closed past informs his present. He gives us America in the Vietnam era, innocent, wary, heartbroken and tough. He says the book is not about the Vietnam war but is about an American city in l972. However, mostly it is about the young men who served and the families who were broken by that catastrophic conflict.