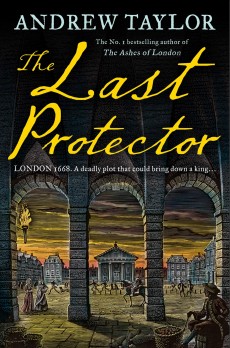 James Marwood and Catherine Lovett (now Hakesby) must combat the latest intrigues of George Villiers, Duke of Buckingham, as he seeks to exploit the return of the fugitive Richard Cromwell, son of Oliver, and late Lord Protector of England.

Elizabeth Cromwell, widow of Oliver, is dying. Her last wish is to get a message to her son Richard, the second Lord Protector, now in exile somewhere on the continent, telling him how to find her secret bequest to him. “Ferrus will help him”, she says. This opening scene launches the fourth in Andrew Taylor’s compelling Marwood and Lovett series.
The Duke of Buckingham again looms large as a ruthless megalomaniac, reliably violent and confident in his invulnerability as a lifelong friend of the king. His sinister enforcers, Veal and Durrell, are plausibly threatening and vicious.
The plot pivots around Richard Cromwell, who has now returned secretly from the continent to recover his mother’s bequest and to see his daughter, also named Elizabeth, who is well realised as an avaricious schemer and yet a caring if increasingly exasperated daughter.
Cromwell, who was known even when in power as Tumbledown Dick or Queen Dick, is a weak character, given to wishful thinking. He is manipulated by Buckingham in an attempt to use the Cromwell name to propel a non-conformist insurrection to undermine the Catholic King Charles II.
James Marwood, or Marworm as Buckingham contemptuously renames him, is forced to resist Buckingham’s plot almost alone. This confrontation drives the well-paced action, which soon involves Catherine Lovett, now Hakesby.
Marwood and Hakesby are both outsiders, open to suspicion as the children of renegades. This creates a bond, reinforced by previous shared adventures but made fragile by mutual misunderstandings. As a result, complications multiply.
Marwood is an engaging hero, by turns naïve, determined, fearful and tactically clever, but capable of violent action in extremis. As a court official, he is a master of managing upwards, while keeping his counsel and acting as he sees fit.
While Marwood is the chief actor, Catherine Hakesby is the more convincing human character. She is clear-sighted, courageous and determined, fighting to overcome the handicap of being a woman. She is both interesting and admirable, as well as nobody’s fool.
Ferrus, introduced by the widow Elizabeth in the opening scene, is a memorable supporting character. Effectively a slave, destitute of mind and body, he is used at the opening of each chapter to sustain an aura of mystery and to hint at the brutishness of life at the bottom in Restoration London. In the end, as Elizabeth foretold, Ferrus does help.
There is a strong sense of place, with all the action being concentrated in familiar parts of London, reinforced by an almost Dickensian cast of minor characters like Pheebs, Reeves, Wanswell, Merton and Madam Cresswell, as well as Ferrus.
The narrative is engrossing from the start and builds steadily to a gripping climax and a deft, satisfying denouement. The final scene is beautifully staged to pause this most enjoyable saga ready for the next instalment.

Timothy Field retired from the international oil business as soon as he decently could to devote his time to his true interests: books, the outdoors, sport and the arts. He cannot recall a time when he was not engrossed in a thriller.