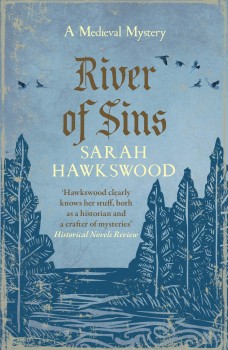 In July 1144, the butchered body of Ricolde, the woman known as ‘the finest whore in Worcester’ is found on an island a few miles up the River Severn from Worcester.

As Undersherriff Hugh Bradecote, Sergeant Catchpoll and their young apprentice Walkelin uncover the details of Ricolde’s’s life, her past reveals a woman with hidden depths that could be fundamental to the answers they need. She was no common street prostitute, but an astute businesswoman with substantial independent wealth, who chose her clients carefully, provided an understanding shoulder to cry on and contributed generously, although always discreetly, to charitable causes.

Deplored by the self-styled ‘goodwives’ of Worcester and lacking friendships with other women, she had chosen a life that gave her independence and a substantial income. Hawkswood portrays Ricolde and her difficult, tortured past with real sensitivity. Even now, sex workers are rarely accorded respect when victims of crime, either in real life or fiction and Hawkswood goes on to explore intriguing themes around social mobility, the role of women in the family and in society, and the importance of family in medieval times.

Violent marriages, crooked businessmen and the deceased’s own history combine to throw up plenty of suspects, but this proves a very perplexing case – and the stakes are raised again when a second prostitute is found murdered in an alleyway and a further woman, apparently with little connection to the case, is killed in the town.

This seventh story in the Bradecote and Catchpoll series, set against the background of a continuing on-off civil war in 12th century England, is without doubt Sarah Hawkswood’s best yet. She portrays baronial and manorial lords, priests and monks, the ordinary people of the towns and the villeins in the manors and does all this without loss of pace or clarity. In a time when class totally dictated a person’s station in life, she treats all equally and sympathetically, although is always ready to send up the pompous and self-important.

One of Hawkswood’s strengths is her character development, particularly of the central trio. Undersheriff Hugh Bradecote is maturing into an intelligent and shrewd investigator, despite a tendency to allow emotion to overrule logic; irascible hardcase veteran Serjeant Catchpoll, now beginning to feel his years, is warming towards his superior as Bradcote learns some of the tricks that have made the serjeant such a feared law enforcer; Walkelin’s youthful energy and keen observational skills see him growing rapidly into the role, learning to deal with the rigid feudal system and offering shrewd and worthwhile contributions. Together they are combining into an effective and believable team.

As the investigation progresses, secrets from the past and hidden agendas are revealed along with tantalizing clues and false trails all deeply sunk in the superbly generated atmosphere of medieval Worcester.  Hawkswood keeps the tension building with some dramatic scenes as the trio close on the culprit.

This is as much a tale of personalities, relationships, ambition and class differences as it is of murder. Hawkswood’s ability to mix humour with the complexities of everyday life and her crisp and descriptive writing, provide an effective lure into the depths of this medieval who-dun-it.

Read it as a standalone or, as I did, become fascinated and follow the series.