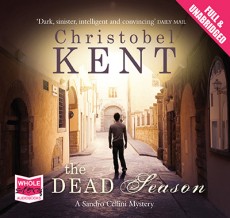 It's summer in Florence and anyone with the means or the commonsense has fled the baking hot city.  Sandro Cellini and his wife Luisa are holed up in their sweltering fla, and bank teller Roxana Delfino is stuck behind the counter at the largely deserted and very old-fashioned Banca di Toscana Provinciale

Roxana's elderly mother is behaving bizarrely, and a regular customer seems to have disappeared. Sandro, meanwhile, is persuaded to investigate when the fiancé of a young pregnant woman goes missing. Then a body is found by a roadside.

Sandro is a gruff former cop, now a private investigator, with contacts still in the force. He's a dogged so-and-so, as he plods around the boiling city, supported by the very sane Luisa and by Guili, a former drug addict, who appears to be their surrogate daughter.

It took me a fair while to realise that I was a good way through the book and not very much had happened. But it didn't matter a scrap, as I was hooked. I was there in baking hot Florence, rolling my eyes at Sandro's stubbornness, clinging onto the back of Roxana's scooter, sneaking around her back garden with her, trying to work out who's been spying on her and her mother, and trying to pretend I wasn't spooked by the sinister deserted cinema which seems to draw the cast like a magnet.

British writers have chosen Italy as a setting with mixed results. But Christobel Kent can write, has a lovely eye for detail and plots very competently. THE DEAD SEASON is certainly a character-driven book with much inner musing from the characters. And this is what makes the book so enticing – real people trying to do the best that they can.

Saul Reichlin is one of Whole Story Audiobooks' most reliable narrators. He's not the best on accents, and he tends towards the ac-torly at times, but he can pace a book well. THE DEAD SEASON is a book to savour and to wallow in.