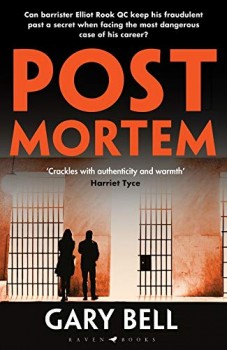 Elliot Rook QC and his protege Zara represent clients who have become the victim of a vicious campaign for supremacy by a London drug tsar.

After a tough childhood in Nottingham and a spell in prison for fraud, Elliot Rook struggled to reform himself, and is now a QC at a top London chambers with a posh accent to match. He has formed a close working relationship with Zara Barnes, a pupil who would like to join the same chambers but whose colour and sex make this unlikely in the very traditional atmosphere which pertains there.

Both Elliot and Zara have clients who are facing serious accusations arising out of the trade in illegal narcotics. Rook is representing Charli Meadows, who works at HMP Wormwood Scrubs. Shortly after multiple deaths at the prison from the use of adulterated drugs, a search of Charli’s car uncovered tobacco soaked in the synthetic cannabinoids known as spice.

Barnes’ client, Andre, happened to step into a pub toilet while he was out jogging. Unfortunately the pub was raided by police and the other six occupants of the toilet were busily flushing drugs at the time, so Andre was regarded as guilty by association. Andre believes there is a man named Omar Pickett who can establish his innocence, but he is in hiding from a gang, the A10 Cutthroats.

Rook and Barnes are unusual in that unlike most barristers, their efforts on behalf of their clients are not confined to action in court. As the book begins, Rook is breaking and entering a training facility for attack dogs on behalf of Reid, another client in remand on drug charges. He finds pit bulls and the dog of choice for dealers, Dogo Argentinos, as well as a Staffi bitch who has been misused, and which he cannot resist taking home with him. This proves to be Rook’s only romance, although Lydia Roth, the solicitor who referred the cases, shows a good deal of interest.

Elliot and Zara spend time following up leads from their clients. A rumour suggests that the drug trade is being consolidated by Ray Macey, a one-time London gangster now resident in Spain, who is enforcing his rule through his children – twins who make the Krays look harmless. Many of the young men they meet are rappers, including Post Mortem, whose name provides the title of the book.

For most of the book the prospects of the protagonists achieving justice for their clients seem poor, and it is only late in the day that Rook comes to a realisation which provides the key. There is enough about barristers’ lives and procedures to satisfy the most ardent lawyer groupies, but not a great deal of action in court, which comes as a bit of a disappointment.