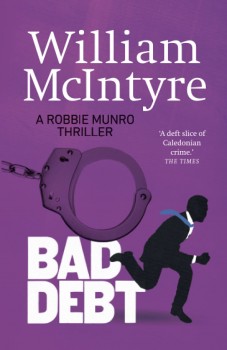 Lawyer Robbie Munro agrees to defend a man who assaulted a housebreaker – and finds himself accused of murder.

This is the sixth outing for Robbie Munro, defence lawyer for a long line of dodgy clients. His wife Joanna works as a prosecutor in the Procurator Fiscal’s office, and sets a somewhat higher moral tone than Robbie despite her best efforts to reform him.

Robbie is persuaded, against his better judgement, to defend the Provost of West Lothian from a charge of assault against a housebreaker. The case has been delayed so long that the prosecution is in danger of being time barred, but Joanna is put in by the PF at the last moment and manages to secure an extension.

To the surprise of the counsel for both sides, when the case does get underway, the victim and chief witness claims to have no recall of the matter. Then Joanna is threatened with assault; Robbie contacts Stan Blandy, one of his more disreputable contacts, to identify the man. Blandy goes one better, and has Robbie picked up to question someone he has abducted and is holding at an isolated farmhouse.

The man escapes before Robbie has got to the bottom of the matter, but next day the police arrive and arrest Robbie for his murder. The farmhouse has a great deal of blood on the floor, and Robbie is aware of a pickaxe handle left at an outbuilding, with blood on one end and his fingerprints on the other. Robbie spends the rest of the book trying to find out what has been going on and assembling sufficient evidence to get himself off the hook.

As with the previous books in the series, the author’s familiarity with Scots law takes the story down some interesting byways. His wry comments, voiced through Robbie, suggest that the machinery of criminal law is prone to occasional deficiencies, and is largely operated for the convenience of the police and government. It may be doubted whether the situation in England is greatly different, but there are certainly differences in titles and operation of the law that make for interest.

The narrative is enlivened with a continuous stream of amusing asides about the characters in Robbie’s life. His father and brother Malky, ex-Scotland footballer and TV pundit, are always ready with caustic advice. The bairns Tina and young Jamie, as well as the dog Bouncer, play an active part. The adults in his circle – colleagues, barmen and clients – all share an overriding interest in drink and football, and are ever ready with dubious advice.

What is particularly engaging about the series is how the author provides Robbie’s unvarnished views about events, which enable readers to make their own judgement on his ethical standard, and to compare that with the views about Robbie expressed by his family and friends, which are invariably cynical.