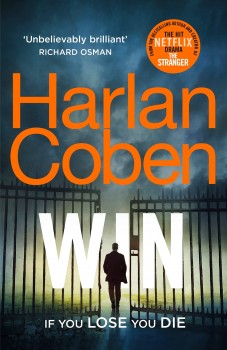 The death of a reclusive hoarder triggers a reappraisal of an FBI cold case involving the abduction of an heiress and the theft of two valuable paintings. Fresh evidence leads the investigators to the door of the rich, violent, amoral Win Lockwood III.

Windsor Horne Lockwood III has been an almost constant presence throughout Harlan Coben’s Myron Bolitar series and has even appeared in the YA spin-offs starring Myron’s nephew Mickey, but now, for the first time, the laconic, amoral Win gets to take centre stage.

Over 20 years ago, Win’s cousin Patricia was abducted during a daring art heist at the Lockwood family mansion. Patricia was kept in an isolated cabin for several months, abused and traumatised, before she finally escaped. The two valuable paintings were never recovered. The cabin was later associated with the kidnap and murder of several other young women and the killer has never been brought to justice.

When a reclusive hoarder is found dead – murdered – in his New York apartment, two objects in his collection cause the police to sit up and take notice. One is a Vermeer painting, one of the two stolen from the Lockwood mansion. The other item is a leather suitcase embossed with the initials WHL3.

The FBI are keen to reopen the cold cases and the initials on the suitcase send them in the direction of the obvious person … Win. Naturally, Win is keen to find out how the painting and the suitcase ended up in the dead man’s possession and the investigation is complicated by the revelation that the man who kidnapped Patricia is also wanted on charges of domestic terrorism.

Harlan Coben has delivered another slick, entertainingly twisted thriller with all his customary pace and style. The stories of a group of young people caught up in a protest that led to a death provided an interesting background second strand to the story and for the life of me I couldn’t spot the connections until the pieces started to finally slot into place. Instead of trying to work things out, I just enjoyed the ride.

The only thing I was in two minds about was whether the choice of the first-person narration by Win was a wise one or not. For reasons that I’ve found quite hard to put my finger on, I couldn’t entirely buy into it. Win’s voice just didn’t quite ring true for me, perhaps because I’ve known the character for so long and in consequence the change from third person to first person was just too jarring. I have exactly the same problem when Quintin Jardine uses first person for Bob Skinner. That aside, Win’s total lack of conventional morality is something I’ve always found interesting – sigh, yes, I know, it’s my bad boy thing again.

I enjoyed the guest appearance by Win’s daughter, Ema, a crossover from the Mickey Bolitar YA series. She’s a character who definitely merits more airtime in any future books featuring her rich, powerful, decidedly dangerous father. I’d also like to see Myron through Win’s eyes, but with the former sports agent retired now, I’m not sure how likely that is. But that’s still on my wish list!