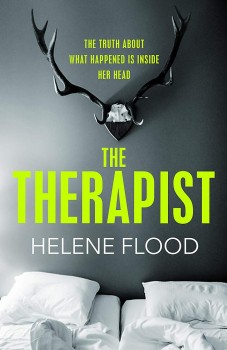 A voicemail from her husband Sigurd tells Sara he's arrived at the holiday cabin. Later a call from his friend confirms he never did. And then the search for a missing man turns into something much more sinister.

Helene Flood is a Norwegian psychologist specialising in violence, victims and trauma. Her first novel tells a story of an ordinary 30-something married couple and their connections with families and various friends. Sara runs a private practice for troubled young people, a business located above the garage next to their newly inherited house which she is renovating with her ambitious over-worked architect husband Sigurd. The refurbishing process stalls as the couple seem to run out of enthusiasm and money. But life goes on in the unfinished rooms.
One Friday morning as Sara wakes up, Sigurd has already gone to a holiday cabin to spend a relaxing weekend with friends. A voicemail conforms that he has arrived. Sara goes through the day and sees her three teenage clients as always, until she receives a call that Sigurd has never turned up at the cabin. Certain that this must be a mistake or there is some confusion, she starts thinking of all and any possible explanations. Soon the house begins to feel less safe and increasingly threatening as random items are moved or disappear, and steps can be heard in the empty rooms.
A book from a therapist (not practising but a researcher) throws some very interesting aspects into the mix of the reality of a search for a missing person and the world of thoughts and worries that develops in Sara’s head. We follow her as she goes from concern and disbelief through growing anxiety, self-doubts, questioning her marriage and everything she has known about her husband, and about herself in the process.
As a lonely person she has set boundaries for others. She seems to have gone from self-reliance to being powerless in face of the events, and as she is unable to express her emotions and certainly has trust issues, even when it comes to her closest family: sister and father. Here there’s a history of feeling misunderstood, a bit rejected, vulnerable: her mother died when Sara was small, the big sister Annika took over the paternal responsibilities as her father was mainly emotionally absent - as an academic and an author of hugely controversial opinions he had a following of dedicated students and a special place in the world where provocative views on life’s values resided. Sara avoided discussing anything difficult with him, and so she has also refused to deal with martial issues. This in itself is nothing world-shattering, yet in the aftermath of Sigurd’s disappearance and her inability to find out what’s been going on in the months before, makes her ready for therapy.

She spends most of the time on her own in the safe space of the house. The personal and working space limit the everyday experiences and create even more loneliness which she does not wish to acknowledge. It’s simply too painful. Marriage to Sigurd seems fragile as he always either works or is tired.

As we see the investigation through Sara’s eyes we can also discover how the police deal with the matter. Various members of the investigation team react differently to her claims and worries, offering indifference, doubts or reassurance. The main detective, weary and sceptical Gunnar Gundersen Dahle, shows compassion and also challenges her thoughts and experiences. Because who knows whether rearranged magnets on the fridge doors, a missing ancient gun and noises at night are real or figments of imagination.

The finale of this tense psychological thriller, in an excellent translation by Alison McCullough, is surprising, yet understandable in some ways. It brings closure and at the same time the unknown territory of mixed loyalties, trust, guilt and how people’s moral compasses swing in different directions.