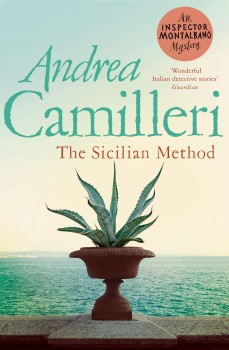 Mimi Augello stumbles across a dead body whilst making a hasty escape from his married lover’s apartment. And then another identical dead body turns up elsewhere.

Inspector Montalbano is woken in the middle of the night by his colleague, Inspector Mimi  Augello, who is in a state of shock, having inadvertently stumbled upon a dead body. It’s all very awkward as Mimi was somewhere he should not have been.

Subsequently another body is reported elsewhere. The second body turns out to be that of Carmelo Catalanotte, a theatre director. Then a young man is shot in the leg as he leaves his house one morning. So Inspector Montalbano and his team have plenty to keep them busy, not least having to work out how to bring Mimi’s first body to light, without making Mimi’s wrong-doing public. In addition to everything, there is a very attractive new Chief of Forensics in town, Antonia, who takes on the cases.

Although much of the story reads like a farce, there is, as is usual in a Montalbano novel, a very interesting mystery underlying the action. In the beginning, Mimi’s rather ridiculous behaviour, as he escapes from his married lover’s apartment by scrambling down to the floor below via the balcony, sets the farcical tone.

Then it appears that the second victim, Catalanotte, worked in the theatre. Part of his job was to select future plays and to recruit the most suitable actors. This theatrical link adds to the already slightly fantastical tone of the story.  Add to that the usual peculiar way in which police officer Catarella speaks, and it is apparent just how much humour the book conveys.

In this book too, there is a sense that Montalbano himself is looking forward to a different future. There is a sense of freedom in how he conducts himself and in his reflections. This, together with the descriptions of the way in which Catalanotte went about recruiting his potential actors, is indicative of the thinking and the psychology that underpin the story, in particular the idea that some people have borderline personalities, making them perhaps unpredictable in the ways they react to events and people.

Food is never passed by in this story but just gets better and better: from the doctor’s totally squashed cannolo to the timballo di maccheroni in crosta, not to mention the sartu di riso; the caponata; the involtini; and the spaghetti alla carrettiera. It is enough to make anyone rush to the nearest Italian cookbook to bring to life such evocative tastes and smells of Italy.

The writing is clear and succinct, any descriptive prose being lean and yet making the scene totally visible. This, together with the intriguing plot, allows the book to be read in a trice.  The usual characters are all there and the usual pile of papers to be signed are on Montalbano’s desk. The police station at Vigato is well and truly established as a place where intriguing crimes are solved with deft, thoughtful analysis, and humanity.