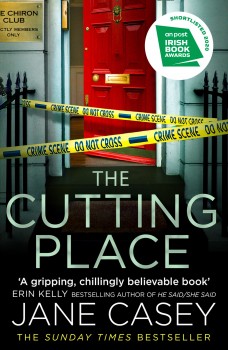 A dismembered body found in the mud of the Thames foreshore leads DS Maeve Kerrigan into the more rarefied air of the exclusive and expensive Chiron Club in her search for a killer.

DS Maeve Kerrigan and her boss DI Josh Derwent are called out to the Thames foreshore where a mudlarker has made a gruesome discovery of dismembered body parts. DNA analysis reveals that the remains are those of Paige Hargreaves, a young journalist who was reported missing by her best friend eight days ago.

When Maeve and her colleague Liv visit the dead woman’s flat, they find no evidence of a struggle, although the flat itself is a total mess, riddled with black mould and mildew, stuff strewn everywhere but no mobile phone, laptop or computer – strange omissions for a journalist. From a chat with the downstairs neighbour, Maeve and Liv learn that someone posing as a police officer entered the flat on the pretext of following up on the missing person report and took those items away, along with a stack of papers.

Further investigations lead Maeve to believe that Paige’s murder might relate to her investigations into a high-end London club frequented by the sort of men who are prepared to pay through the nose for the kind of membership benefits that can only go on behind firmly closed and very secretive doors.

I’ve been a fan of Jane Casey’s stylish police procedurals for a long time. Maeve Kerrigan is a protagonist with real depth who has progressed in a believable character arc from her first appearance 11 years ago (she’s not aged in real time, though) as a young detective riddled with insecurities, not knowing how to cope with her overbearing boss. She’s now a confident detective sergeant who knows perfectly well how to deal with Derwent, a man who can, when he wants to, dispense sarcasm and charm equally effectively to all and sundry, but particularly to Maeve.

Their relationship has mellowed over the years. Derwent is now in a settled relationship with a woman and her young son. Maeve is going out with Seth Taylor, a man who can’t do enough for her. Their working relationship has established itself into a reasonably comfortable routine and they both genuinely care for each other. My favourite bad boy seems to be showing distinct signs of turning into a fairly normal human being. But just when you’ve been lulled into a false sense of security, Casey starts to throw in the curve balls

Seth Taylor seems rather too good to be true. His behaviour towards Maeve begins to come over as controlling even if she doesn’t seem ready to see it that way. Derwent is certainly unimpressed (no change there, then!) and doesn’t hesitate to make his views plain. Things are complicated for him too, and his already short fuse promptly becomes even shorter with the discover that he might have a grown-up son that he knew nothing about. To complicate matters further, that new-found son is connected to their current investigation.

The plot is as clever as anything Casey has previously thrown my two favourite coppers into and, as ever, she succeeds in bringing a human dimension to the story without feeling the need to burden her characters with enough emotional baggage to sink a Thames river barge. The more minor characters are equally well-drawn and with Derwent’s son, it’s definitely the case that the apple hasn’t fallen very far from that particular tree! His appearance is also the catalyst for some soul searching on Maeve’s part about her relationship with her boss, both professional and private. Derwent might have all the tact of a bull elephant, but I freely admit that I had my doubts about Seth from the beginning.

The investigation into the Chiron Club and its members highlights the worst sort of behaviour that so often accompanies the privilege of wealth and Maeve’s short stint undercover proves it’s not a world she wants to be associated with as she tries to unravel not only the murder of Paige Hargreaves but also the death of a young man several years previously.

Jane Casey delivers very superior crime fiction where people behave like people, not just cardboard cut-outs moving around a gaming board pushed by an invisible hand. Instead, she shines an uncomfortable spotlight on the subject of controlling, abusive behaviour and the difficulty of pursuing a successful prosecution, even when everything is very close to home for her main character.

This is a series I simply can’t get enough of. Quality police procedurals rather seem to have been knocked off the shelves by the ever-increasing number of psychological thrillers and domestic noir in all its variants, so it was really nice change to get back to basics with my favourite female detective and the bad boy partner who is now happy to show he cares, even at the risk of compromising his carefully cultivated image. The final reveal was incredibly skilful and I definitely didn’t see it coming!