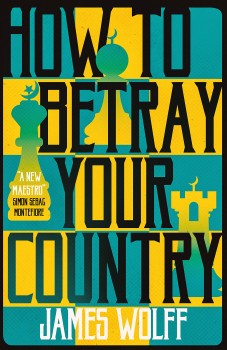 How To Betray Your Country

August Drummond’s service as a spy has been terminated, but he remains in the game as a distraction from his grief over the death of his wife.

When August Drummond met his wife, her questions about the morality of his occupation led him to break the Official Secrets Act on several occasions to right minor wrongs. Without proof, his employers were unable to prosecute, but the suspicion was strong enough to earn him dismissal.

Drummond clings to the way of life, however, which together with drinking provides a bulwark against his despair following his wife’s death in a traffic accident. As the book opens, he is on a plane to Istanbul on the offer of employment. He spots a young man who he recognises as having all the signs of an IS recruit, and purloins a book containing a place and time for a meeting.

The man is arrested on arrival, and August assumes his identity for the purpose of the rendezvous. He is met by someone Drummond terms ‘the vizier’ and follows instructions with a view to (eventually) reporting details to his ex-employers. Lawrence, a colleague who was largely responsible for his dismissal, is also in town hoping to use August for his own purposes.

Things become increasingly complicated, assisted by Drummond’s propensity to anaesthetise himself with alcohol. He meets a Syrian desperate for employment to enable him to re-establish contact with his wife and child. Drummond is on bad terms with everyone and barely functioning, and it starts to look as if he will end up as a pawn in the hands of IS, paraded on TV for an execution.

The details of August’s transgressions, and how these arose from discussions with his wife, are revealed only slowly through the book. Part of the back story is filled in by means of memos between Lawrence and others in the secret service. All those involved come across as very clever and articulate, whatever view may be taken about the validity of their actions.

This latter aspect of the book is perhaps the most interesting. The essence of spying is manipulation of persons for the advantage of one’s country, and in the literature the sacrifice of individuals for some greater good is a common theme. To have an insider subtly manipulating the system to redress the balance is a brilliant idea.

Drummond, therefore, is bound to enjoy our sympathy for his efforts. The overwhelming nature of his grief seems perhaps difficult to comprehend, but only in that instead of paralysing effort it acts as a spur to keep moving, a distraction from the feelings which would otherwise cause him to shut down completely. The only question seems to be how long Drummond can keep going, and the ending feels entirely right.