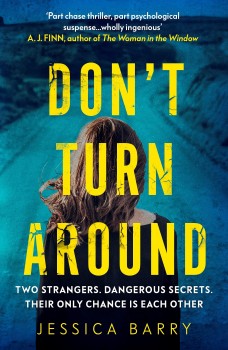 Cait and Rebecca are strangers. But within hours, they realise they must trust one another to survive.

Cait is a journalist who’s doing her best to avoid the vitriol from the online community after a one-night stand with an up-and-coming singer. She is waiting in her jeep outside a smart house in Lubbock, Texas – not at all the kind of place she usually gets sent to. The woman takes her time to come out, almost too much time. And from the start, Cait senses this journey is going to be dangerous.

Rebecca, the wife of a powerful politician getting ready to run for the senate, doesn’t seem to take to Cait at first. Perhaps it’s the grubby jeep, or perhaps she doesn’t like being driven by a girl ten years younger than her, who’s obviously from a different world.

But they are on a night trip across Texas to New Mexico – a journey with a deadline. And it’s one where their secrets will unravel and their past will catch up with them as the danger increases. Soon they will find out they have more in common than they know. But that and their growing friendship may not be enough to save them from the predator in the truck behind.

The story is told from multiple points of view, the main ones being Cait’s and Rebecca’s. It also time travels, little by little teasing out the facts behind the mysteries and secrets that Cait and Rebecca are trying so hard to keep. Although it is in the third person, the main characters have enough depth and breadth to limit the distancing effect. And there is a good balance between action, introspection and dialogue in the sharp, short chapters.

The sinister atmosphere keeps what could potentially be a rather slow-moving plot on its toes. And fascinatingly, the road between Lubbock and Albuquerque becomes a gnarly, threatening character in its own right.

There are more red herrings than most people could fit in their deep freeze, and plenty of twists and turns. Unfortunately, some did nothing to drive the story forward, and I came away from this one feeling there were too many unnecessary also-ran characters who were only there to confuse the issue.

I enjoyed the development of the relationship between Cait and Rebecca; it was what I wanted, although as some of their secrets unravelled, their blossoming friendship tested my suspension of disbelief a tad.

Sadly, this book cosies up to the kind of feminism that relies on exaggerations, portraying men as dangerous enemies. The author made almost every man that Cait and Rebecca encountered on their journey out to be bad, menacing, creepy, or all of the above. The story would have been more powerful if the men had been more nuanced, with more shades of grey. They were two-toned: black and white. It also felt a bit political, a shade Hyde Park soap-boxy in places, though, without giving anything away, the subjects raised in this story are relevant and should not be shoved under the carpet.

The ending is rushed, but acceptable, although I did end up dissatisfied. I almost have the feeling that the author had three or four possible endings and picked this one out of a hat.

I loved Jessica Barry’s first book, Freefall. And Don’t Turn Around was, despite my reservations, a satisfying read.