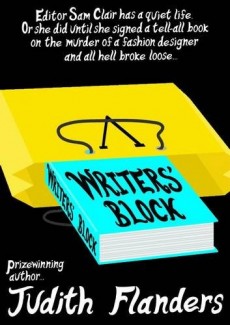 Samantha Clair is no high-flyer, but she's pottering along happily in the world of London publishing. Then her favourite author disappears and she's suddenly the focus of a lot of attention.

Samantha Clair is a 40-something editor, happy to potter along in the world of publishing. She's surrounded by bright young things, but is comfortable with her roster of authors – until one goes missing.

Kit Lovell is Sam's favourite author. And he's been working on a no holds barred book about the death of a top fashion designer. When Kit disappears and a range of folk start to take an interest in his manuscript, Sam finds that she too is at risk. And to make matters worse, her surefire banker author Breda McManus, who keeps them all in a job with her tales of middle-class, middle-aged women and their problems, has delivered a deeply bizarre chick lit novel ...

Writers' Block is a first novel – and a departure - for Judith Flanders, who has worked in the publishing industry, but has been known in recent years for her non-fiction work on Victorian history. It has a lovely, relaxed tone to it, with cameos aplenty. You get the feeling that those in the know in publishing will be spotting friends and enemies with great relish.

The perennial problem with cosies is ensuring that the reader is convinced by the amateur sleuth poking their sticky beak into the mystery. Flanders does a sound job here of getting Sam involved, without turning her into Superwoman (although you may have to suspend a touch of disbelief at the European gadding about and a spot of breaking and entering!)

What adds to the book's attraction is the supporting cast. Sam's Gothy PA Miranda, who earns her money by dealing with Breda's manuscript, is wonderful, and I want Helena, Sam's mother, to adopt me now – I'm perfectly willing to put my smart frock on, attend dinner parties and be introduced to wealthy legal movers and shakers! Also fun are Sam's actor neighbours who throw the sort of parties you'd want to attend, and there's also the mysterious Mr Rudiger who lives in the top flat. The weakest character is Jake Field, the rather one-dimensional detective inspector – he feels like a stock character in terms of both law and order and in unresolved sexual tension between him and Sam.

Writers' Block is charming and an absolutely perfect reading for a Saturday curled up on the sofa. It's the kind of feel-good book which gives you an attack of the warm fuzzies – and you can't complain about that!