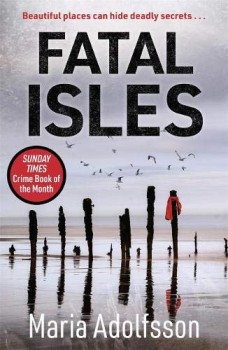 In the middle of the North Sea, between the UK and Denmark, lies the island nation of Doggerland.  Not much happens there in the way of crime, until one day Police Chief Jounas Smeed's ex-wife is found brutally murdered.

Fatal Isles is the first in a proposed trilogy from new writer Maria Adolfsson. The book gets off to a great start as she has created a very credible fictional location: Doggerland. It comprises three islands in the North Sea with one ferry connection to England and one to Denmark. These beautiful but rugged islands provide the perfect atmospheric background to brutal murder. They are to flawed detective Karen Eiken Hornby what Shetland is to Jimmy Perez and what Gotland is to Swedish detective Anders Knutas.

In the North is Nooro with a predominantly Norwegian and Danish heritage – industrious and god-fearing. In the South is Frisel with more extensive Dutch roots – the population there is said to be lazy and frivolous. And in between is Heimo, where most of the action takes place, with a mix of British, Scandinavian and European blood. The author paints a very vivid picture of her made-up land and there is much potential here.

Detective Karen Eiken Hornby has worked for many years with the police force in London before returning to her place of birth. And it seems that she has struggled with her role as a detective in the police headquarters at Dunker, the capital of the main island. Some of her male colleagues are old-fashioned and patronising and that includes her boss Jounas Smeeds.

The situation isn't improved when Jounas's ex-wife, Susanne, is found with her head beaten in. It's the morning after the night before and Karen is recovering from an evening at Doggerland's annual oyster festival when the grim discovery is made.  And to make matters worse, Karen has woken up in a compromising situation with Jounas and only she can provide her boss with an alibi ... Tricky.

As the most experienced murder detective on the team Karen is placed in charge of the investigation. She puts together a small team of well-portrayed individuals who, I hope, will follow her into subsequent outings. She also collects Leo, a local down-and-out, who reluctantly helps Karen with her enquiries and also Sigrid, the belligerent and damaged young woman who is the bereaved daughter of odious Jounas and the equally repugnant Susanne. These characters take root in Karen's solitary life and my guess is that we will be seeing them again, which is all very promising for the trilogy.

The investigation makes slow progress and the male chauvinists on the team doubt Karen's ability.  But there are regular glimpses of the past and life in a hippy commune in the 1970s where activities shocked the islands' native inhabitants. We are led to believe that Susanne's murder has its roots in this commune and, through her research Karen comes to the same conclusion. And in parallel with the revelations of 40-year-old secrets we learn more about Karen's own past – her time in London and the tragedy that forced her to return to Doggerland alone and to a closed off and solitary life.

The murder of Susanne Smeed is put down to a burglary gone wrong and Karen's theories are laughed out of court. She ends up on leave and there’s an all-action finale where the truth is finally revealed. Although all loose ends are tied up satisfactorily, there are enough left dangling for me to find out immediately when the next book comes out – 2022!