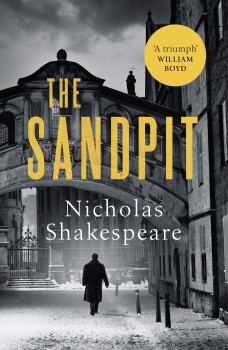 Writer John Dyer’s meeting with an Iranian nuclear scientist, the father of one of his son’s schoolfriends, plunges him into a dangerous world of power, espionage and violence when the man and his son disappear.

Former foreign correspondent John Dyer returns from Brazil with his young son, the time he spent in the favelas of Rio consigned to memory. Each day he drops Leandro at the smart Oxford prep school he himself had attended, then walks to the library to research his new book, an esoteric tome on the Tupi, an obscure indigenous Brazilian tribe.

Dyer, a man riddled with doubts and indecision, is uncomfortable on the edges of an influential social circle normally beyond his sphere. The school’s intake is now international, with wealthy and powerful parents from wide-ranging backgrounds, including hedge fund managers, Russian oligarchs and the intelligence services. He lacks the financial resources to compete, and struggles to find his feet in this new life after years abroad. Then a touchline conversation at a school soccer match with an Iranian nuclear scientist, father of a friend of Leandro’s, sparks a series of events that prove rainy Oxford can be just as dangerous as Rio.

When the scientist and his son both disappear, Dyer, as the last person to have seen the man, becomes the focus of attention for several sinister multinational business or intelligence factions interested in the scientist’s ground-breaking research – and what he might have told Dyer about it.

In fact, he has left Dyer with revolutionary, potentially world-changing scientific knowledge which puts him in the centre of a both a political manhunt and a personal moral crisis.

As his inability to make a decision and his fears mount, Dyer’s memories of his own school life and friendships influence his thinking, as do doubts about whether or not to publish the greatest scoop of his journalistic career and his over-riding need to protect his son.

The eventual resolution of Dyer’s dilemmas is both surprising and clever, a satisfying answer to the problem. The aftermath and the people and agencies who have so relentlessly pursued is less so.

Nicholas Shakespeare’s technique is over-wordy and mannered, and he has an unfortunate tendency to slip from narrative past-tense to the present for a few sentences, then go back again. He’s also fond of improbable similes and metaphors that deserve a whole edition of Private Eye’s Pseud’s Corner to themselves and often unnecessarily parades his knowledge of academic Oxford, fly-fishing and other subjects. All this combine to make the book hard work.

This is a perhaps overly deep investigation of the nature of friendship, family relationships and moral dilemmas in a very up-to-date and contemporary setting, but with rather too many literary flourishes.

Overall, this story promised rather more than it delivered, and I have to admit to being a little disappointed. It’s by no means bad, but it’s not that good either and I have come to expect rather more from a supremely talented writer, some of whose earlier work, particularly his brilliant Inheritance, is among the best I’ve read.