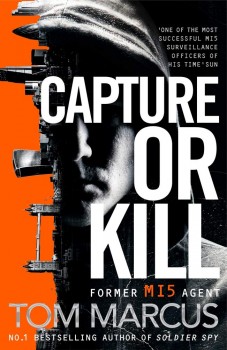 A newly-formed black ops team, drawn from MI5 surveillance officers, must work against the clock to stop a terrorist attack.

I’m not normally a fan of authors writing under pseudonyms, but in the case of former MI5 surveillance officer Tom Marcus, it’s hardly surprising that he’s not using his real name!

However, I’m very much a fan of books written by people who have lived the lives they now write about. It works well for me with former special forces soldiers Andy McNab and Chris Ryan, and I certainly wasn’t disappointed by Tom Marcus’s first fictional offering, although as my dear co-editor likes to point out, I am something of a connoisseur of what she dubs willy-waving thrillers.

The premise of Capture or Kill is hardly original – a wholly deniable black ops team put together to do the job that needs doing without compromise or recourse to anything approaching safe working practices. But Marcus brings a level of street cred to the detail that only having been at the sharp end of high-end operations can import. The level of detail adds to the sense of immediacy without ever threatening to overwhelm the story, and he doesn’t devote pages to info dumps.

The story is told from the point of view of MI5 officer Matt Logan, a man who is in danger of always putting his job before his private life. When his life is brutally torn about by a random act of terrorism, Logan wants nothing more than to bring bad guys to justice, and by that I don’t mean just locking them up and throwing away the key. The Director General himself recruits Logan and a bunch of other experienced and talented MI5 officers to form the core of an off-the-books unit able to employ any means necessary to get the job done and keep the people of Britain safe.

Their first job comes along quickly, leaving the team struggling to catch up with two terrorists, codenames Iron Sword and Stone Fist, who are believed to be planning a major attack on British soil. The brothers are good at evading the team, and tension solidly mounts as the stakes get ever higher. The use of the first person present tense from Logan’s point of view lends a raw immediacy to the narrative, especially when Logan is pushed to his limits when forced to carry out a very unpalatable order.

The action remains believable throughout – provided you can swallow the initial premise of the black ops intelligence team – and I was thoroughly caught up in the hunt for the bad guys. As ever, with a largeish team, characterisation is a bit shaky at times. Logan himself comes over as a believable character as he lugs a very heavy sack of troubled history around on his back. I didn’t get much of a sense of what Alex and Claire, the two women on the team, are really like, other than competent. Alan, the tech expert is straight out of the Q stable, but that’s not intended as a criticism, as I suspect he’ll come into his own more in subsequent books, as will the other team members, Craig, Ryan and Riaz. My only reservations were about slimy ops boss Jeremy Leyton-Hughes, who was the epitome of what’s wrong with the old Etonian and Oxbridge networks, and did appear to be straight out of central casting although I have a nasty suspicion he might not be far from the truth.

If you share my taste in thrillers, Capture or Kill lives up to its promise, and Tom Marcus delivers a punchy story with oodles of realism.