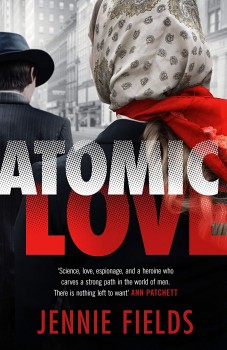 Brilliant young scientist Rosalind Porter is haunted by guilt over her work on the Manhattan Project. She is also heartbroken by the ending of her love affair with a colleague. Then an FBI agent contacts her to suggest that her former lover is a Russian spy.

This character-driven tale of America’s McCarthy era and its constant hunts for ‘Reds under every bed’ is as much social history and a vibrant and passionate love story as it is an espionage thriller. At times it’s very sexually colourful, at others mysteriously cloak and dagger, but it grips from start to finish.

Despite her very traditional upbringing, Rosalind Porter has always defied expectations – both in her work as a groundbreaking physicist with Enrico Fermi on the Manhattan Project and in her passionate love affair with British colleague Thomas Weaver.

Five years after the end of both – her exit from the A-bomb team engineered by Weaver to coincide with his ending of their relationship – her guilt over the effects of the bomb and her heartbreak are intertwined. She’s now an antique jewellery retailer in an upmarket store, desperately misses her work in the lab, but has almost resigned herself to a more conventional life.

Suddenly Weaver gets back in touch. Almost simultaneously, so does the FBI in the shape of Special Agent Charlie Szydlo who wants Roz to spy on Weaver, who the Bureau suspects of passing nuclear secrets to Russia. She is forced to question whether she can spy on a man she still loves, despite her better instincts. At the same time, she finds herself drawn to Charlie, a Polish-American former prisoner of war, tortured and partly crippled by the Japanese, who is as much haunted by his past as she is.

As Rosalind’s feelings for each man deepen, so too does the danger she finds herself in. She knows that she will have to choose between the unreliable but fascinating man who taught her how to love and the motivated and sincere man her love might save.

The story is largely told from the perspectives of the two principals and the characterisation is excellent, with some of the encounters between Roz and both men so intense that I started to feel like an eavesdropper. Charlie’s revelations of his experiences as a prisoner of war are profoundly moving and one of the most realistic descriptions of a decent and determined man’s battles with PTSD I have ever come across.

Jennie Fields’ portrayal of the growing freeze in the Cold War at the start of the 1950s is both clever and accurate as is her depiction of the near-paranoia that since Russia had been ‘gifted’ atomic weapons through the treachery of Klaus Fuchs and others it might also acquire the vastly more powerful H-Bomb by the same undercover route.

Almost as an aside, in a serious piece of social comment, she also highlights the changing role of women in society and how, as the result of the shortage of wartime manpower, some were now both wanting and expecting more than their traditional roles.

With such brilliant writing, it’s not difficult even for an old cynic like me to feel the growing emotional charge between them. There’s also plenty of espionage action and danger, as well as an intriguing plot containing betrayal, secrets and lies, wire-taps, covert operations, and people operating under false flags.

In a lot of ways it reads like some of the early Bond books, but Fleming at his sparkling best could never have achieved this compelling and touching tale of three damaged people, let alone the very believable romance with a capital R!

This is the first time I have read anything by Jennie Fields. Her writing is fluent, always easy to digest and occasionally quite emotionally brilliant, offering both a solid interpretation of the era and characters that are both true to life and easy to relate to.