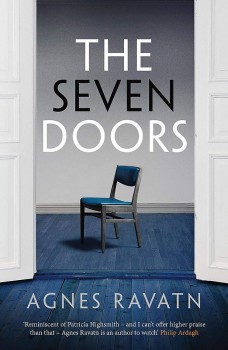 Nina, a literature professor at the University of Bergen, decides to turn her analytical skills to criminal investigation when Mari, a tenant from the family’s second home, suddenly disappears, especially as this happens shortly after Nina visited the property.

Agnes Ravatn’s dark new psychological thriller The Seven Doors brings themes of guilt, loyalty and confidences. Two different houses hold memories and secrets. One, a cherished childhood home, is scheduled for demolition to make way for a new city project; the other, inherited from an aunt, has been let out for years. Both are owned by an affluent couple in their 60s: Nina, a literature professor at the University of Bergen, and her husband Mads, a doctor currently working in local government.

Their emotional needs are unbalanced and so is their approach to an unexpected event. They consider moving and their tenant vanishes shortly after an uncomfortable visit from Nina and Ingeborg, her self-absorbed pitbull of a daughter. The sudden disappearance of 30-year-old Mari Nilsen disturbs Nina more than she could have anticipated considering she hadn’t even been aware of the tenant and her small boy, now left alone with grandparents.

So Nina starts own enquiries as the police lack any significant clues and soon shelve the case. She realises that the missing woman is the famous Mari Bull, a virtuoso violinist who performed and travelled across Norway and other European countries, and then withdrew from the public eye.

Nina, dissatisfied with own career, decides that she can do a better job of cracking the case. She contacts parents, acquaintances and the ex-husband of the missing woman. However, her illusion of being perfectly equipped to solve crimes does not immediately make her another Varg Veum, the most famous fictional social worker-turned-private investigator searching for truth in rainy Bergen.

This proves to be both ironic and uncomfortably entertaining as she focuses her investigation on artistic clues. For example, the folktale of the wealthy Captain Bluebeard, notorious for marrying and killing his wives, synonymous with coercive control exerted by a man in a relationship, takes on a new meaning for Nina who sees the performance of an opera based on the tale as a clear signal that Mari’s ex-husband might be responsible for the disappearance, and maybe even her death. She also looks for motives in the private diaries and Freud’s psychoanalysis. As she analyses minute details and nuances of behaviour, her vast knowledge of ancient Greek tragedies might not actually help to stop the unravelling of the dramas among those close to her. The disturbing results of questioning various people have serious consequences not just for her, but also for Mari’s grieving family.

The narration is sprinkled with literary and artistic references and, coupled with the use of musical terms, creates an atmosphere of impending dread, and an unsettling feeling of guilt underneath the calm surface of confident, professional and well-established adults. The author allows her main character to follow different leads and stumble upon risky suspicions as the strong sense of location and bleak weather often take centre stage, reflecting confusion, uncertainty and fears. Rosie Hedger’s translation captures the unique understated yet eloquent style of Ravatn’s effortless, flowing prose, a distinctive voice in modern Norwegian literature.