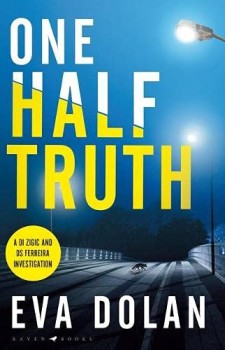 DI Zigic and DS Ferreria must investigate the late-night shooting of a young, would-be journalist and then find themselves caught in a long-running saga of revenge and high-level corruption.

This seventh book in Eva Dolan’s long-running Zigic and Ferreria series is, as usual, up to the minute, dark and gritty and as smartly plotted as ever. She still offers a sharply politicised edge – this time featuring the problems of those forced out of work when a major local employer, a sector-leading automotive engineering factory, is bought out by European rivals and shut down. There are also plenty of dirty deals among the privileged which very senior officers are unwilling to either recognise or deal with.

Underlying it all – and that is what has made these books so compelling – is the occasional hint of racial tension. Dolan produces a more than convincing procedural, right down to the pompous management-speak now compulsory for anyone aspiring to rise above the rank of inspector and brilliantly depicts the pressures of an investigation, including interviews, with great realism.

Zigic and Ferreria are assigned to investigate the late-night shooting of young would-be journalist Jordan Radley – an idealistic left-winger wanting to do his best by society. Obvious causes, drugs or gangs, are quickly ruled out. He was working for free at the local evening paper to build his skills and his first big story, focusing on the effects on the local community after the closure of a major factory, had recently appeared in the Big Issue. Radley’s house has also been broken into and his laptop and all his notes stolen.

The story doesn’t pull any punches, detailing how people are struggling for jobs, money and any sense of security. But given how high Dolan has set the bar with her earlier stories, I was a little disappointed. The narrative is slow to get going, with too many crimes taking place within a very small circle of characters, leaving the detectives and the readers jumping from guess to guess, almost illogically in places.

Having said that, the focus on a group of men who lost most of their sense of self-worth with their jobs through a piece of rapacious asset-stripping which makes those responsible very rich, is all too relevant and nowadays all too often true. The trail is obscure, with plenty of blind alleys which can be confusing and frustrating – much less of a classic piece of detective fiction and much more like many of the real investigations I was privileged to observe as a crime reporter.