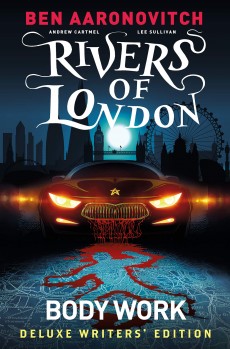 When a BMW turns into a watery grave for its owner, river goddess Beverley Brook tips off copper Peter Grant that there might be more to this than just an accident and sets him on a collision course with a murderous car.

The Rivers of London graphic novels are a superb complement to the books and novellas in this ever-entertaining series, bringing the world of the Folly and its inhabitants even more vividly to life – and yes, trust me, that is possible. The Folly, for those who haven’t yet dipped their toes in these magical waters, is the home of those members of the Metropolitan police who deal with ‘Falcon cases’, the codename anything connected to magic and the supernatural, more colloquially known as ‘weird shit’.

Body Work was the first of the graphic novels to appear, and this new edition is a visually gorgeous addition to any fan’s bookshelf. The original artwork is faithfully reproduced on the right-hand page of this hardback volume, but without the overlay of the text panels. All this, together with a brief description of the panel and each of the captions, is set out on the left-hand page, frequently accompanied by one or two of the original uncoloured panels and, occasionally a reference photo. The latter are a particular delight, showing how closely the stories are tied to real places in London and how perfectly the cityscape has been reproduced.

I was struck, yet again, by how evocative the colouring is, starting with an eerie underwater scene as a man dies in a BMW that’s rapidly sinking into the Thames. In the final panel, river goddess Beverley Brook’s face can be seen reflected in the windscreen, looking both surprised and sad. The following panel with its corresponding text provides the reference photo of the view of Putney Bridge from the nearby Embankment, amply demonstrating how faithfully the detail of the bridge has been reproduced. The Met police recovery vehicle provides a splash of orange detail in an otherwise gloomily lit scene,

As DI Miriam Stephanopoulos and Sahra Guleed of the Major Investigation Team stare lugubriously at the dripping car and its very dead inhabitant, PC Peter Grant, the most junior member of the Folly, slouches in, hands in his pockets, looking deceptively casual. Stephanopoulos looks sceptical when Peter dodges her question about how he heard about the death and Peter doesn’t reveal that it’s his occasional girlfriend, Beverley Brook, who’s tipped him off. Talk of river goddesses tends to make senior officers faintly uneasy, as does being around members of the Folly.

The handy Reader’s Guide at the back of the book shows each of the books, graphic novels and novellas by their covers, on a section of a map of the Thames. From this it can be seen that Body Work slots into the series after the fourth full-length novel, Broken Homes, and before Foxglove Summer. By now, Peter is reasonably experienced in the delicate handling that weird shit often requires, but there’s nothing delicate about being repeatedly attacked by a murderous, haunted car. Despite the strangeness of a story that spans half a century, this sort of thing is now all in a day’s work for Peter and, as usual, Guleed copes with everything that’s thrown at them with unflappable calm.

With graphic novels, there’s always an extent of ‘your mileage may vary’ with regard to the depiction of much-loved characters, but for me, every one of them absolutely hits the right spot, especially the smart, urbane Inspector Thomas Nightingale, Peter’s boss and mentor in the art of magic, and also Peter himself, Guleed, Toby the dog and Molly, the Folly’s sinister housekeeper. I don’t have a single quibble with any of them and was absolutely happy to wallow in the rich, deep colouring and the sharply-drawn panels, all of them perfectly capturing the scenes described on each facing page. The effect was like reading an illustrated script, and the explanatory details all added a rich, additional layer to this gorgeous deluxe hardback.

I particularly enjoyed the flashback scenes to Nightingale at war in 1944 and the iconic moment when a Tiger Tank loses to him at the fabled Battle of Ettersburg. The flames emerging from the tank combine with smoke and dark clouds to form a fiery face and tell you all you need to know about Nightingale’s power as a magical practitioner in one hard-hitting, terrifyingly vivid panel.

Even if you already have Body Work, I wouldn’t hold back from indulging in this volume as a rare treat. It’s well worth having.