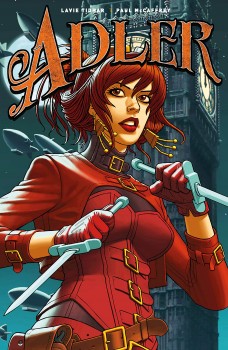 Jane Eyre, Irene Adler and Lady Havisham team up to fight a dark threat to London in a gloriously drawn steampunk romp.

London in 1902, still troubled by the aftermath of the Boer War, is on the eve of moving into a more modern world, transformed by electric lighting and new horseless automobiles. Queen Victoria remains on the throne, thanks to experimental science and new medicine; after all, steampunk London wouldn’t be the same without her presence looming large.

Jane Eyre returns from the war, wounded at the battle of Mafeking and still grieving the death of the man she loved. An old friend, the glamourous and inventive Lady Havisham, introduces her to Irene Adler, an unconventional American with a thirst for adventure, and the two women find lodgings together. Jane quickly becomes embroiled in Adler’s long-standing secret war against Ayesha, the immortal She-Who-Must-Be-Obeyed, who is determined to get revenge on the colonialists who took her country from her.

Adler brings together a host of crime-fighting women, determined to stand against Ayesha and her underworld followers, including the deadly assassin Carmilla, to fight for possession of a secret weapon developed by genius scientist Madame Curie. The fate of the Empire is at stake, naturally, and only Jane, Irene and their friends stand between it and ruin.

Lavie Tidhar’s talents as a writer combine perfectly with Paul McCaffrey’s strikingly moody art to produce a rollicking adventure in the best tradition of both Arthur Conan Doyle and my own childhood favourite, Henry Rider Haggard, creator of She-Who-Must-Be-Obeyed. I think they’d both enjoy seeing their two famous female characters go head-to-head in this gloriously energetic steampunk romp through the dark highways and byways of a London that’s both strange and familiar all at once. Charlotte Bronte would no doubt be equally entertained by her own heroine’s part in foiling a very dastardly plot.

The brown tones used throughout much of this graphic novel perfectly convey the dark streets and the even darker mass of criminality seething beneath the surface, with Lady Havisham, dressed in white, of course, standing out from the rest decked out in her riding breeches and futuristic military style jacket, toting some impressive weaponry. The colouring is the perfect companion to the art, never too dark to make out what’s going on, suiting the strong, easily distinguishable characters. There are even some men in the mix, too, but the focus is all firmly on the female characters. If you ever wanted to fight crime, these are the women you’d want at your back – and in front of you as well!