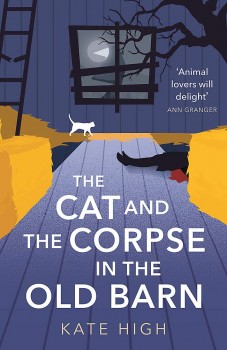 The Cat and the Corpse in the Old Barn

Ceramic artist Clarice Beech finds herself lying on a decomposing body after a fall as she attempts to capture an escaped cat. Together with her separated husband Rick, a detective inspector, she sets out to uncover the truth behind the death.

Ceramic artist Clarice Beech, searching for a runaway three-legged rescue cat, follows a lead that takes her to the suitably suspiciously named old Hanging Barn. When she climbs onto ancient rafters, they promptly collapse under her weight and she falls, losing consciousness. When she comes to, the subject of her rescue is placidly sitting on her – while she’s lying on top of a pile of rotting straw and a decaying corpse. Together with her separated husband Rick, a detective inspector, she sets out to uncover the truth behind the death.

Kate High has produced a cosy, satisfying and well-developed mystery. Her protagonist, amateur sleuth Clarice is very much a woman of her times. She works from home in a converted outbuilding and has a genuinely realistic and intelligent outlook on life. Her backbone of unflappability makes her very likeable lead.

Clarice is also believably imperfect with her heavy emotional and financial investment in cats. Add to the mix a few dogs and an estranged police detective husband and somehow this all seems perfectly normal and just how you would expect life to be in the semi-rural, but comfortably off, villages of today’s Lincolnshire Wolds. Her animal rescue activities and many cats play an original and key part in the story.

Even the villains of the piece, the dreadful criminal Cocker family and the arrogant, over-entitled local gentry Lord and Lady Fayrepoynt and their various offspring are well-developed and made to appear surprisingly human, if flawed.

It’s fitting that a cat helps Clarice out of the mire of blackmail, historical scams, jealousy, greed, bastardy and murder as it was cat who got her into all this in the first place! Despite my dislike of cats, which I’m sure will once again feature all too prominently, I’m looking forward to her next case.