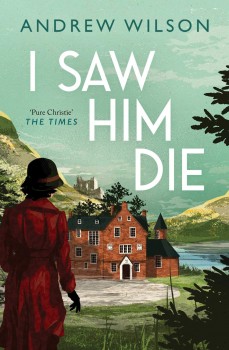 I Saw Him Die

Best-selling author and detective Agatha Christie is asked by the British intelligence service to investigate a series of threats to a former agent.

Best-selling author Agatha Christie is recovering from the strains of her last adventure and seeking to settle her own mind before her wedding to the much younger archeologist Max Mallowan, who she met during that desert adventure. She plans a getaway break with her daughter and sister in the Scottish Highlands, but her plans are interrupted when John Davison, the intelligence agent she worked with on her last case, seeks her help after a former British spy receives a series of threats to his life.

Robin Kinmuir, who now runs the hunting lodge of his family’s former estate as an upmarket hotel, is not the hail-fellow-well-met landlord he appears. He’s a reckless spender and gambler now on the verge of total bankruptcy, a thoroughgoing cad who has charmed and conned his way through life leaving a trail of broken hearts and dreams behind him.

The strange collection of guests all have their own reasons to hate him – and each has received a mysterious letter suggesting they should be present at Dallach Lodge to see him ‘punished’. After a pleasant first evening, slightly marred by a beautifully rendered description of the usual social snobbery of the period (the final glorious summer before the First World War), a morning shooting party is disrupted by what appears to be the accidental shooting of Kinmuir, who dies in the arms of his nephew.

What follows is a well-plotted, hugely entertaining classic whodunit filled with red herrings and double-crosses as Christie and Davison attempt to sort out the truth from a deftly rendered cast of characters all who have something to hide. At the same time, Christie is struggling, following an attempt on her life, to redefine her relationship with her daughter and her future with Max and is also questioning her role with the secret service.

Anyone who loves Agatha Christie in the original should read this entertaining and clever series. If you don’t know her work, don’t worry. All four books can be read as standalones because the stories, characters and settings are all near-perfect for any mystery fan.