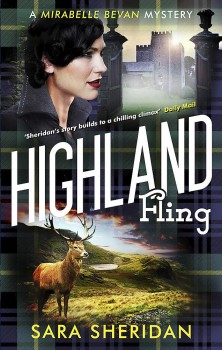 A Highland holiday to visit Superintendent Alan McGregor’s family turns into a week fraught with danger for ex-secret service sleuth Mirabelle Bevan when her arrival is greeted by the murder of a Russian/American fashion buyer.

Sara Sheridan’s ex-secret service wartime heroine, Mirabelle Bevan, seems to have rather lost her way in the latest of this up till now fascinating series of 1950s not-quite-cosy noir crime mysteries. Perhaps moving from her beloved Brighton to the Scottish Highlands, a world of old aristocratic families, ancient castles and wild scenery, has upset the equilibrium of the south coast’s hitherto most stylish sleuth.

The book is set against the tide of Cold War anxiety sweeping Britain as international tensions mount amidst fears of nuclear war and the world lurches towards what four years later was to culminate in the Cuban Missile crisis.

As Mirabelle and Superintendent Alan McGregor begin to seriously discuss marriage, they head off on a short holiday to visit his surviving family. Their Highland estate is altogether more aristocratic and glamorous than she expected, and the Robertsons welcome her with open arms. But Mirabelle has hardly downed her first cocktail when the body of an American fashion buyer is found brutally murdered, sending shockwaves around the close Highland community.

Mirabelle can’t resist investigating, but what she finds calls into question the loyalties of those around her. Her discoveries also force her to have doubts and re-examine her own feelings for McGregor as what started as a relaxing break spirals downwards into a week fraught with press intrusion and danger.

Toss in the dead woman’s White Russian family, convinced that everything is a result of a Communist plot, and one of Mirabelle’s former secret service colleagues and you have the perfect recipe for confusion and chaos.

Sheridan never fails to surprise. Her characters are beautifully realised and vivid, both heroes and villains, her settings are atmospheric and the plot, however unlikely, positively zips along. Although this multi-layered story has murder, international intrigue and serious crime at its heart, she manages to convey both a sense of character, charm and even a certain amount of fun.

Mirabelle Bevan, unfailingly stylish, undeniably smart, is beneath her rather prim exterior, a tenacious, near fearless, woman so typical of those who served at the sharp – and often dark end – of the last war. I’ve had the honour of meeting one or two survivors and remain in awe. It’s easy to see why they were all honorary life members of the Special Forces’ Club!

For me, what lets the series, and this story in particular down, is an overly political stance. While I agree with the condemnation of several Highland aristocrats for their shameful pro-Hitler pre-1939 ‘appeasement’ stance, I don’t believe that every Conservative is a fascist waiting to be unveiled.

Whatever your views, this should not put you off what is a clever, well written, if a tad unbelievable, story of detection by a determined and intelligent woman years ahead of her time!