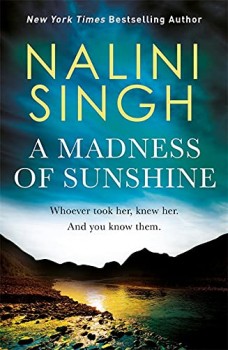 A Madness of Sunshine

Anahera has barely returned to her remote rural birthplace when a young woman goes missing, and the close-knit local community fear there is a serial killer close to home.

Golden Cove is a small community on the west coast of New Zealand’s South Island, situated between verdant ancient forest and a dangerous shore. It is called a town but given its size and isolation it is more like a village, rife with gossip and rumour but also where people take the trouble to look after vulnerable neighbours.

The book opens with a meeting between Anahera, a woman born in Golden Cove now returning after years away, and Will, the sole local policeman. Both are in a sense hiding in Golden Cove after traumatic events in distant places, but the back story of the two is drip-fed and it is only towards the end of the book that we catch up completely. The two have the same abrasive manner but are soon sleeping together.

Anahera is back in town only a day when a young local woman, Miriama, sets off on a run but never returns. The people of the town are mobilised remarkably quickly to search possible trails, without finding any trace of the woman. Will locates Miriama’s diary, which shows that until recently she had been in love with an unnamed married man but had ended the affair in favour of the local doctor, with whom she appeared happy.

As Miriama’s absence extends to days, Will revisits other disappearances in the area in years past of unaccompanied women exploring the bush, giving rise to a suspicion that there may be a serial killer in Golden Cove. Some local residents are trailed as potential candidates before the true culprit is revealed.

Nalini Singh has a long list of fantasy tales to her name; this is her first venture into crime fiction. The village she creates is persuasive, full of people familiar with their neighbours for decades and aware of most (if not all) of their secrets. City folk may find this a little claustrophobic and creepy but the general sense of caring for others does redeem that feeling somewhat.

The two main characters have a dimension outside their current setting arising from their background: Anahera unexpectedly widowed in London followed by the discovery of her former husband’s infidelity, and Will posted to the sticks after his violence to misogynist men threatened his career. Brutal, selfish and untrustworthy men are a recurrent theme in the book.

If this all seems rather dark, the women are mainly loving and nurturing. Whilst the sexual stereotyping might be a little too in-your face, the book is well-paced, with plot developments and a steady flow of revelations from the past sustaining interest. The setting is sufficiently exotic to make the atmosphere distinctly different from a village in the UK.