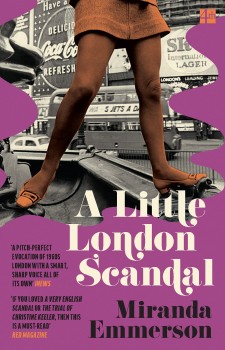 London in the 1960s was a time of great social change but also a time where social mores resulted in a clandestine word of sexuality and corruption.

Nik is a rent boy. Not his choice, he was driven there by family circumstance, running away and then exploitation and the need to live. Anna works in Soho in the theatre as a dresser. She is in a mixed-race relationship and is in her job because she didn’t go to university. Merrian is the wife of a politician who was once a rising star until tainted by scandal. She wants to maintain her safe life with her son, daughter and husband and is willing to behave accordingly.

London is changing. The 1960s are challenging values and principles that were once accepted. The world of homosexual men is partly overt, in that men openly meet other men in recognized places, but equally it is still a clandestine world and criminal, with police raids and imprisonments part of everyday life. What is not different to the present day is that wealth and power give influence to the privileged whose behaviour and predilections can be swept under the carpet as long as they are not too overt, while the poor are subject to abuse and recrimination. It was not safe to be a practicing homosexual. Rent boys were frequently subject to assault and exploitation, whether by casual pick-ups or by becoming the playthings of wealthy men.

One evening, Nik is seeking to earn money by casual liaisons, one of which results in him being badly assaulted. He then runs from a police raid at Kings Cross and is arrested in the wealthy square in Mayfair where a boy is found murdered in the private gardens of a gentlemen’s club and his bruises make him a convenient scapegoat for solving the crime. Members of the club are not even interviewed.

Anna knows Nik and decides that he has been dealt with unfairly. She gains the support of a sympathetic police officer and together they seek to exonerate Nik.

Merrian’s husband was at the club and the News of the World threatens to associate him with the crime, linking to a previous alleged gay sex scandal, which had been dropped, though not without cost to his career. Merrian is forced to confront truths that she has chosen to ignore.

This book is extremely well written. London in the 1960s is so clearly described you can almost smell the streets. The frustrations and hopelessness of parts of society are overwritten onto vestiges of Edwardian morality and the power of wealth and privilege. The streets of Soho, the behind-the-curtains world of the theatre and, most strongly, the rent boys’ vulnerability is all depicted sensitively and realistically. What is very scary is a comparison of the attitudes of the police and the influential with the current situation. Some things seem to have changed less than others.

On top of these powerful descriptions, a fairly simple plot, albeit with added twists and complications, is described beautifully and the book is extremely readable.