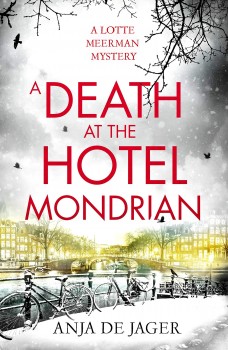 A Death at the Hotel Mondrian

When Dutch detective Lotte Meerman is approached by a man claiming to be someone who has been dead for more than 30 years, she ignores him but later regrets her decision.

Lotte Meerman is a cop with a conscience, who at times seems to bear the weight of the world on her shoulders. When the story starts, she is helping out a colleague investigating what appears to be the latest in a string of vicious assaults and robberies in Amsterdam’s red light district when she is approached by a man who tries to tell her he is not really dead.

The name he gives her is that of a teenager whose skeletal remains were found in the coastal sand dunes near Amsterdam more than 30 years ago. The case was considered one of the great textbook successes of the Dutch police force and the schoolteacher eventually accused of his murder hanged himself.

Lotte knows the by now legendary tale of Andre Nieuwkamp, dubbed by the press as the Body In The Dunes, and dismisses the man, assuming he cannot possibly be who he claims, choosing instead to continue with an attack investigation that appears to be an open and shut case as the victim can identify the attacker, who he claims is his wife’s Turkish former husband.

Yet by the following day, her conscience nagging her as to why anyone should make such an extraordinary claim, she decides to visit the hotel address he gave her to probe his story further. All she finds is his corpse – an apparently obvious suicide. But his passport shows that he wasn’t Andre Nieuwkamp as he had claimed, but Theo Brand, a British citizen.

When subsequent DNA tests reveal the man at the hotel actually was Nieuwkamp, Lotte must solve a double mystery: the reason why Nieuwkamp waited so long to tell anyone he was still alive, and also the identity of the teenager whose bones were found in the dunes decades ago.

Neither the assault case or the cold-case death are as simple as they seem and Lotte, already psychologically damaged by her past and tortured by the mistake she made with Nieuwkamp, plunges into a whirlpool of difficult and dodgy family relations, lies and betrayal, her search hampered by a publicity-hungry new police commissioner, keen to convince the public at every opportunity that he is on top of crime in the city.

The procedural side of the investigations, as you would expect given De Jager’s background, is sound and believable, if occasionally a little unorthodox. Her portrayal of Lotte’s self-imposed isolation and guilt complex is quite outstanding.

Amsterdam, the iconic setting for Nicholas Freeling’s Van der Valk books and the subsequent TV series, more than plays its part in this tightly written, cleverly plotted whodunit that will keep you guessing almost to the final page with De Jager’s evocation of its bitterly cold winter streets and sordid red light district adding a distinct chill to what is a first class mystery story.