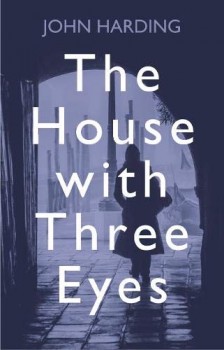 The House With Three Eyes

On her way to board her plane to Venice, Stella helps an elderly man. Tragically he dies on the plane and due to a baggage mix-up, Stella becomes involved in the mystery surrounding his death.

Stella Butler has taken a few precious days off her work as an events organiser to take some photographs for her MA research into the way in which the lagoon in Venice is being eroded. On her way to board her plane at Stanstead airport she stops to help an elderly man who is having difficulties. Unfortunately, he dies during the flight, and Stella is called upon by the aircrew to stay with him until the police arrive. She is required to go to the hospital in Venice to identify the body which seems to be that of a well-known elderly artist, Harold Foster.

Somehow in the confusion, this man’s belongings get muddled with Stella’s and she ends up with his phone. She is contacted on this phone by a mystery caller, who turns out to be an aging rock star, Keefe Cottesloe, who had been due to meet Harold. He had been looking for an ex-girlfriend who he thought was Harold’s daughter. Despite Stella’s best attempts she gets drawn more and more into a very complicated situation, involving a house called Tre Oci, and an artist called Alex, whom she meets when she goes out for a walk.

This is a book that might be best read in one sitting as the plot is very complex and involves numerous characters, all seemingly related. There is a mixture of styles of writing. Some parts are written as normal story-telling prose, whilst other parts are written in italics, using the voice of Stella herself. There seems to be no clear distinction between the two styles in terms of what is included as content. There is much detail and overlap between the various threads in the story which makes it difficult to grasp the main flow until some way through the book.

The best aspects of the book are the descriptive passages of places in Venice. The detail provided could almost serve as a guidebook for visitors. Stella goes to the islands in the lagoon, including Burano. The description of her journey to Burano and of the island itself is just beautiful, giving a wonderful sense of the peace of this area away from the main parts of the city. The sound of the church bells against the quietness of the calm water is magical.

Also interesting are the descriptions of places that are probably not on the traditional tourist agenda.  So Stella visits some of the old houses, situated at some distance from the usual landing stages. Time is also spent in a building used by fishermen, right out in the lagoon, far away from the city itself. The description of the mudflats and sandbanks, as far as the eye can see, is most atmospheric.

This is a relatively short story which may have benefitted from being told in a slightly more structured and leisurely manner, but well worth a holiday read.