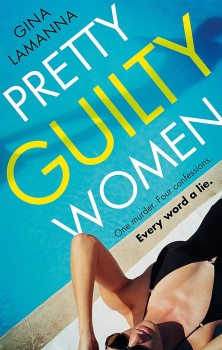 Whitney’s wedding is going to be murder for four of her guests. But it will be the death of another.

Three once-upon-a-time college friends are heading to the Californian coastal, dripping-with-opulence Serenity Resort and Spa to celebrate the wedding of their other college friend. But even before they get there, problems, confrontations and suspicions plague Kate, Ginger and Emily. And Lulu Franc, one of the older family guests but still the life and soul of the party, arrives with baggage similar to the three she will soon meet.
From the moment they all walk through the entrance, the champagne flows freely, too freely for some. But the alcohol consumption will soon be overshadowed by the number of confessions to the murder of a man in the resort grounds. One murder. Four women pleading guilty. Each one declaring she acted alone.
Pretty Guilty Women is the latest book from Gina Lamanna. With more than 30 novels under her belt, she clearly has a formula for success and a following to boot.
The start drew me in, hook, line, and sinker, as sneaky little question after sneaky little question surfaced between lines of a children’s lullaby. The setting and implied characters in that opening scene promised something rather nasty, my favourite sort of crime.
Unfortunately, despite a fun plot and potentially interesting characters, this story threatened to disappear in a ton of cotton wool minutiae and irrelevances. I found myself leaping paragraphs with no more than a glance to see if any pertinent information might be hiding in the flossy shadows. And all too often, the padding caused the main characters to blend one into the other, despite their stories being reasonably distinct.
That said, the author certainly knows how to create flawed characters, whilst giving them a couple of redeeming features. Although the writing style and lack of a main protagonist left me a little distanced, the women were relatively realistic until near the end, where they all came together far too easily.
The police investigation, brief passages before the start of certain chapters, certainly shone out as succinct compared with the rest of the story but felt somewhat farcical.
My main peeve with this story was the mystery – or lack of, partly thanks to the unsubtle foreshadowing and partly because, despite the different approach to setting out the story, I had a strong sense of déjà vu. The whole left me unworried for the safety or outcome of any of the characters. The danger I sensed in that opening scene just never surfaced. The epilogue was utterly superfluous.
Pretty Guilty Women is sold as perfect for fans of Liane Moriarty. While there are parallels with Big Little Lies and Nine Perfect Strangers, this book misses the mark on originality and in-depth characters. I was left underwhelmed and slightly exhausted from an overdose of fluff, but this is undoubtedly a great beach read.