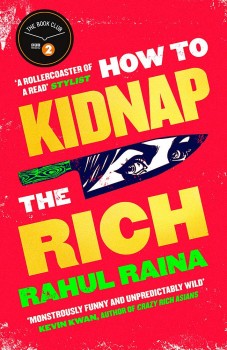 How to Kidnap the Rich

Ramesh Kumar scrapes a living in Delhi by exploiting his talent for passing examinations, but when one of his clients does surprisingly well the opportunity for sharing in the rewards is irresistible.

Ramesh Kumar grew up without a mother, a slave in his abusive father’s tea stall with few prospects until Sister Claire from the Sacred Heart Convent School took an interest. Ramesh works hard but when unable to take exams himself falls into the trade of sitting exams for other boys, those from rich families but too poorly motivated to fulfil their parents’ expectations.

He’s treated like a servant by those he is helping and Ramesh is dissatisfied, but life changes suddenly when sitting the All India exams on behalf of Rudraksh ‘Rudi’ Saxena he gains top marks. Rudi is an instant celebrity, a golden boy beloved by matrons across the country, the world at his feet, and Ramesh is determined to extort his fair share of the benefits which soon begin to accrue.

Rudi becomes the host of Beat the Brain, a top TV show, and sponsors everything from soft drinks to spectacles. Lakhs of money roll in and Ramesh is at Rudi’s side, managing his social media accounts, making sure Rudi is presentable after over-indulgence in drugs and booze, and generally looking after his boss, for ten per cent.

Not everything is rosy, however. A government investigator smells a rat and is being kept at bay only by a pack of expensive lawyers. Ramesh has fallen in love with a woman on the show and is feeling the impulse to confess all. Things really go south when Rudi and Ramesh are kidnapped by the father of a boy who came on the show as a contestant and was badly humiliated. Further kidnappings follow in Ramesh’s attempts to extricate himself, which are not wholly successful.

A gentle humour is sustained throughout the book despite the author’s revelations of the many shortcomings of life as an Indian citizen. Ramesh narrates the book throughout, and his comments are pithy and revealing. Everywhere people put self-interest above everything, and however little they have you can be sure there are those even worse off who can be laughed at or taken advantage of. The commentary is redolent of Jonathan Swift, but with a distinctly South Asian flavour.

New wealth and a growing middle-class only adds to the tackiness of life generally, the build-up of tawdry acquisitions underlining the failure to distinguish between price and value. Not, of course, that India has a monopoly of that sort of thing: Ramesh ends up in the USA where he finds plenty of takers for just a slightly different brand of snake-oil. The book is a parable which might be easier to read than some social commentary but is nonetheless hard-hitting for all that.