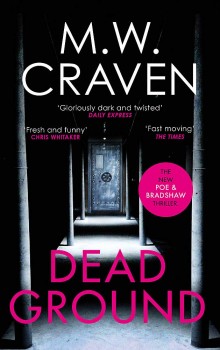 DS Washington Poe and Tilly Bradshaw of the National Crime Agency are called into to investigate a murder at a pop-up brothel and its connections to an important summit being held nearby.

MW Craven has pulled off a double whammy for me and sucked me into a series featuring a protagonist with a quirky name (one of my pet peeves with crime fiction) whose job is to identify serial killers that everyone else has missed (an area of the genre I rarely venture into).

Something about Detective Sergeant Washington Poe of the National Crime Agency hooked me from his first appearance in The Puppet Show and has kept me coming back. I like his partnership with the literal-minded analyst and technical whizz Tilly Bradshaw, a woman with absolutely no brain to mouth filter. I also enjoy Poe’s utter disregard for anything resembling superior orders – unless they happen to suit him.

When Dead Ground kicks off, Poe is in court, fighting to prevent an order to restore his beloved but primitive cottage on Shap Fell (the picturesque bit of the M6 on the way to the far north) on the edge of the Lake District to the derelict condition it was in when he bought it. Despite the district judge’s exhortations to get legal representation, Poe knows he has something the council’s pompous lawyer doesn’t have – he has Tilly Bradshaw on his side, a woman who has never stared a problem in the face that she can’t think her way around, usually by wholly unconventional means.

Unfortunately for Poe, just as the judge is about to succumb to Bradhsaw’s unconventional approach to problem-solving, the case has to be adjourned to allow Poe to be whisked away to look into the matter of a helicopter pilot found dead in a pop-up brothel. It’s not the sort of thing Poe usually gets called to deal with, but this is at the insistence of the security services who are busily getting their very shady knickers in a twist over the dead man’s connection to an international summit being held at the very exclusive Scarness Hall.

Despite his initial and very amusing reluctance to have anything to do with MI5 and their investigation, Poe and also Tilly are roped into the case by the suave Alastor Locke, but Poe is less than impressed by having Locke’s subordinate, Hannah Finch, foisted on him as a minder, and when he suspects her of removing evidence from the crime scene, he has no hesitation in having her arrested when she won’t cooperate.

This is an unusual case for Poe and Bradshaw, taking them deep into the shadowy world of antiquities smuggling by the military out of the many war zones in the Middle East, a subject I’ve been interested in for years, so that plot strand was a very unexpected bonus. The all-important connections that the pair are so good at putting together are more elusive than ever in this outing and all I could do was sit back and enjoy the ride although, much to my surprise, I did twig to the identity of the killer slightly earlier than I usually do (for usually, read generally not at all!).

Craven delivers a tense, clever denouement that takes the combined efforts of one of the most unusual and refreshing duos in current crime fiction to pull it off in a very satisfactory and unexpected manner. The book is chock-full of Poe’s trademark sarcasm and Bradshaw’s ever-delightful apparent non sequiturs and utter lack of any adherence to the usual societal conversational norms. Her comments on Poe’s bowel movements were particularly entertaining. The combination of humour and dark themes is an area in which Craven excels and this is definitely a series that goes from strength to twisted strength.