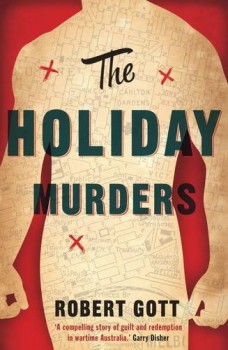 On Christmas Eve, 1943, Police Inspector Titus Lambert and Sergeant Joe Sable of the newly-formed Melbourne Homicide Squad, are required to investigate a double murder which may be politically motivated.

Robert Gott has explained why he chose to set this novel, which is based on actual events, in wartime Melbourne. There was a certain amount of anti-Semitism and in some quarters more than a mild flirtation with Hitler and Nazism. Certain people – a small minority - actually approved of what had gone on in Germany in the 1930s and the magazine referred to in this book pandered to them. Gott feels that this period in Australian history, rarely written about, is important in the context of attitudes towards immigrants today.

However, the test of an historical thriller is not how accurate it is but the extent to which we can be kept in suspense. The Holiday Murders easily passes that test. It begins with one brutal murder and one apparent suicide, though it is soon obvious to Inspector Lambert that it too is a murder.

He is a somewhat unconventional policeman because his work does not appear to have disturbed his family life. He is happily married to a woman whom he trusts with his secrets and who he knows will give him sound advice when he needs it. He is also articulate and intelligent. Lambert’s sergeant, Joe Sable, is Jewish - a fact which is more important to his view of himself than he would care to admit.

The third member of the investigative team, Constable Helen Lord, is the most interesting. According to the rules, the rank of constable is as high as she can achieve in the police force – something than annoys her greatly since she rightly considers herself more intelligent and better qualified that the many of the men around her. She can be described as a proto-feminist in a male-dominated country like Australia. To be included in a murder investigation is a considerable step up for her but she is not in the least overawed and is always more than prepared to give her opinion, sought or not. The care taken in creating these characters and the skilful way in which they are made to interact with each other are the best features of this novel.

The same cannot, unfortunately, be said for the people they are seeking. The central character – the Neo-Nazi looking to make an impact in Australian politics – is scarcely credible. Not only is he sadistic beyond belief, but he is also intensely stupid and never for a moment are we convinced that he could be successful in achieving his aims, whatever they may be.

The same is true of his followers, whom he treats with the utmost contempt. Even when they find themselves holding the upper hand, they seem incapable of getting on with the job of killing their victims. This is a pity because in general the plot is intricate and well constructed and contains a totally unexpected development as the book moves to its close. Even with its rather clumsy characterisation of the bad guys, the book nevertheless keeps the interest right up to the end. We are also left wondering about what is in store for the three police characters and, in particular, whether Joe and Helen will get together at some point.