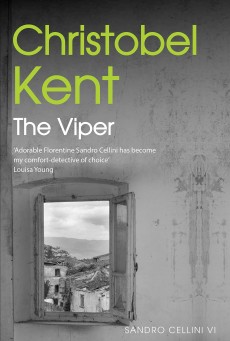 Two bodies are found in a remote area of the countryside near Florence. Sandro Cellini is called back into his old police department as a consultant.  He knows why, but is he strong enough to be able to help?

Sandro Cellini and his wife Luisa are both retired and living in Florence quite near to their daughter Guili and her husband Enzo. Sandro is invited back to his old police department by his successor, Pietro, to help with a particular case. Two bodies have been found in a shepherd’s hut up in the mountains not far from the city.

The hut is near to an old decaying farmhouse, known as La Vipera, that had once been used by a group of young people living in a commune. As a rookie detective, Sandro had been taken there by his boss to investigate accusations by the local villagers of immoral activity.  Very reluctantly Sandro agrees to help Pietro, despite having uneasy memories of that last visit there.

The book begins with a description setting the scene of the second murder. Much of the rest of the book focusses on Sandro Cellini and his family with the plot about the murders running throughout. In addition, there is a subplot involving Luisa, and one involving Sandro himself, one or even two, about Guili, as well as the actual police investigation. All these are woven together, interspersed with everyone’s memories of how things were when the commune existed, and of the people involved in it as they were then, all those years ago, and as they are currently.

The people involved in the story, in addition to Sandro’s family, include both the members of the commune and the residents of the nearby village, past and present, and the family of the big house that sits on the hill looking over it. This makes for a very difficult read as a number of people, such as a woman called Guili, first appear with only scant details of their identity. And the first mention of a man called Gorgone could very easily be missed and then forgotten again, before his next mention. Even with all this complexity, the complete solution to the crime has to wait for a confession revealed in the afterward at the end.

The descriptions of Florence city and of the wooded mountains nearby are very realistic.  The way in which a storm can suddenly appear in that part of Italy, the darkness of the forest, and the way in which water can suddenly begin to flow down the mountain tracks all speak of a familiarity with the area which makes the prose alive and believable in these sections. Indeed, each individual section that has a clear set of characters and a definite context reads very well and is very effective.

The situation of the old commune certainly has the makings of a good mystery, but readers do need to be helped to a certain extent in delivering this. Aficionados of the Sandro Cellini detective books might well be prepared, but it may prove to be a bit of a challenge for a first-time reader of the series.