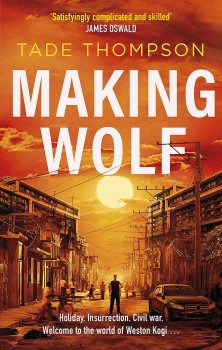 Weston Kogi returns to his birthplace in West Africa for the funeral of his aunt and is pushed into investigating the death of a revered statesman.

Weston Kogi was brought up in Alcacia, a country between Nigeria and Cameroon, but sent off to the UK for his protection by his aunt during a time of civil unrest. He has been working as a supermarket detective in London for some years when his aunt dies, and he returns for the funeral.

Weston intends to stay only a day but is kidnapped by the Liberation Front of Alcacia, who demand that he investigate the death of elder statesman Pa Busi and clear the LFA of responsibility. He has barely started on this task when another dissident group, the People’s Christian Army, march him off into the jungle and instruct him to do the same for the PCA.

Despite his lack of real expertise Weston feels flattered by the imputed faith in his abilities, and doubtful of his chances of leaving the country alive if he refuses, so accepts the job. His enquiries soon reveal that the death is otherwise than reported, and that Pa Busi was clearly targeted for execution. Just who was behind the murder takes longer to discover.

Weston remembers enough of his native language and culture - Yoruba - to communicate, although the many dialects complicate matters. His conversations often revolve around old proverbs, sayings and beliefs which remain widely held in Alcacia despite often seeming unusual to Westerners.

Weston’s movements around the country take him around Ede, the chief city, and out into the countryside. Apart from the fenced compounds of the rich, the picture is universally one of waste, want and violence. Services are limited and unreliable. Beggers are common, many with ghastly self-inflicted mutilations, and ‘area boys’ - youths ever ready for robbery or assault - are everywhere.

Weston has been generously endowed with cash for expenses; bribery is ubiquitous in Alcacia. Unfortunately, his wealth is apparent to others, and he is kidnapped and robbed. He copes with the violence he meets better than your average Londoner, perhaps because he was habituated to it as a youth.

Nonetheless, the picture of Alcacia which is built up is a very frightening one and at first it seems unlikely that Weston will survive. He forms relationships with two women, neither of whom turn out to be what they seem, and he is continually wrong-footed by people seeking to mislead him.

The story is thus a series of surprises, revelations shocking and sometimes horrifying, built on a hellish society which is unfortunately all too believable. Weston’s progress, related in the first person, seems likely to end in disaster at any moment, and the narrative is delivered in short sections which impelled me to continue reading.