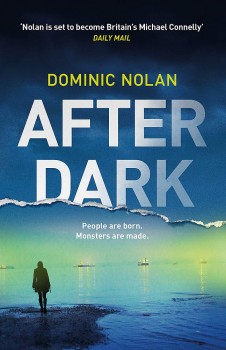 The little girl suffered from man's inhumanity. Now the police must piece together her story because she may never find the words.

DI Barb Bowen leads the investigation when a young girl is found wandering the Kent countryside. The girl, skinny, underdeveloped, and mute, has clearly been kept captive her entire life. The abuse she has suffered is beyond comprehension; a savage depravity only humans could dream up.

Soon the investigation proves that the little girl has links to events that Abigail Boone, former friend and colleague of Bowen, was convicted of an imprisoned for. She had been captured by the predators she was investigating at the time. They held her captive and tortured her before throwing her out of a window. Boone has retrograde amnesia, remembering nothing from before that dreadful moment. Perhaps it is to her advantage, because, untroubled by thoughts cluttering her head, her driving desire is to hunt down predators.

Bowen, despite huge reservations, knows Boone will give the investigation teeth. She needs her former colleague, and with no choice arranges Boone’s release. But Boone’s actions are nothing short of tunnel visioned, wild, dangerous, and reckless. They come with far-reaching but unforeseen consequences.

Nightmares normally come after dark, but the monster that destroyed a young life is a predator with the power to make every second of every single day a living hell, forcing Boone to exact her own style of justice.

After Dark is a standalone crime procedural. However, it is also the sequel to Past Lives, and as a late-comer to the party, I think this story would have been easier reading had I got to the party at the start of the evening. The story flips between the past (four or five years ago) and the present. It was a little jumbled, and I found I needed to concentrate to know where in time we were. Perhaps I wasn’t familiar enough with the main characters with their annoyingly similar names – Boone and Bowen.

In terms of content, this book is not for the faint-hearted. While the descriptions are not gratuitous, they are vivid and, for some, perhaps just too brutal. The characters are complex, as gritty as the plot they bowl through, and they certainly do not stagnate. That said, I didn’t like them, even though I felt for them.

Barb needs slapping for viewing her friend, Abigail, in black and white. For that, I started to view her as Mrs Plod, the stereotype policewoman of Enid Blyton-style stories. She didn't take the time to understand Boone's raw emotions and hatred. Yet part of me wanted to shake Boone too. Her mind was on a single-track road, heading for Vengeance City. She didn’t care about the risk Barb was taking in releasing her from prison. Nor did she seem to give a hoot about her ex or son.

There is a richness and intensity to the story and even more in Dominic Nolan’s writing style. Unfortunately, as much as I enjoyed the plot, the writing is heavy, pretentious and took away from my pleasure of reading it.

For those who seek a book with depth, an unforgiving, unremorseful plot, and vibrant characters, After Dark will satiate. But, caveat emptor, this is not an easy read or a light read.