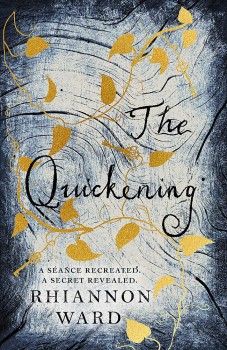 Louisa, trapped in an unhappy marriage, accepts a commission to photograph the contents of a faded Victorian country house. A spate of unpleasant incidents makes her question whether there are connected to her advanced state of pregnancy or whether they might relate to the unfortunate history of the family.

Louisa lost her husband in the recent war, and her two children have also died. Having married Edwin on the rebound from all this tragedy, she soon finds herself pregnant and in an unhappy marriage. In the final weeks of her pregnancy, she is offered a job by her previous employer, photographing the eclectic collection of oddities displayed around a large old Victorian country house.  Desperate for money, and excited to re-acquaint herself with her previous photography career, she decides to accept.

She is warned that the house has an unfortunate history and immediately feels an unwelcoming atmosphere. She finds that one wing is not used at all and that past guests included the famous detective Arthur Conan Doyle and an elderly medium called Ada. Much is made of a séance that Ada had conducted some years ago, which is now about to be re-enacted. There seems to be someone singing in the closed-up wing, a child roaming the grounds and stories of ghosts.

The book paints a well-written, believable picture of a dark, cold, Victorian mansion in the final days of ownership by several generations of a once wealthy family. The descriptions of the parts that are closed or rarely used form a bleak backdrop to the story: the bare, empty nursery, the dark stairs and corridors, even the overgrown icehouse and the dilapidated cottage in the grounds.

Several of the characters are introduced in passing in the first few chapters and it takes a while before those important to the story can be identified. Then the book develops rather like an old-fashioned mystery novel. The character of Louise is developed in some depth as she is the storyteller and constantly reflects on things that happen to her: the voice she hears singing faintly in the unused wing; the child she sees in the grounds; the person or thing that bites her hand when working to develop her negatives in the icehouse; the various bouts of illness she has; and her concern about Ada, the medium.

However, it is not clear whether the story is about Louisa and her experiences, or the family and the repercussions of their sad past. Just when it appears to end, with all the problems resolved, several new chapters appear, carrying on with what happens to Louise after she leaves the house. So, the structure appears to change as the story progresses. This makes the final few chapters something of a surprise as they initially appear to make the ending drag on, after what apparently was the resolution of the happenings in the house.

The book contains some interesting information throughout about photography at a time when bromide-covered glass plates were exposed to light, then developed into negatives, using a variety of chemicals. In general, The Quickening held my attention and makes for an enjoyable, uncomplicated read with just the right amount of intrigue and suspense to keep the story moving along.